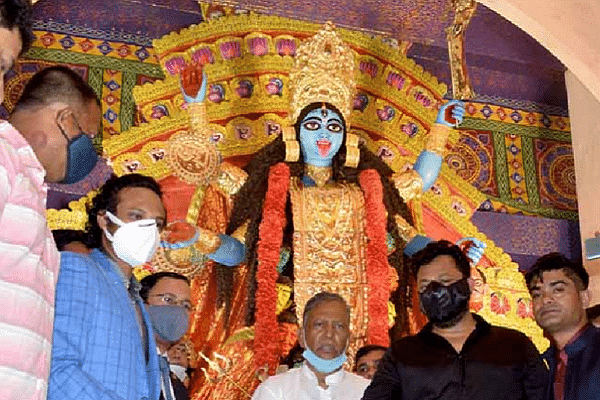 The man was later identified as Mohsin Talukdar from Shahpur Talukdarpara village in Tukerbazar union, Sylhet.

Mohsin Talukdar appeared during the Facebook live session and hurled abuses at Shakib. He threatened to kill the cricketer for inaugurating Kali puja at a mandap in Kolkata recently. He was also holding a large machete in his hand.

In the video, Mohsin claimed that Shakib should be killed as he hurt the religious sentiment of Muslims by inaugurating the puja mandap.

‘Shakib must be killed. I would murder him by hacking if I get him in touch,’ Mahsin claimed in the video.

Mahsin also urged Shakib to apologise for ‘hurting the Muslims.’

Shakib had enraged many Muslims in his country by inaugurating a Kali Puja program in Kolkata on November 12. He also reportedly inaugurated the 59th Shyama Puja of “Amra Shobai Club” at Kankurgachi in East Kolkata by cutting the ribbon and lighting the lamp.

Meanwhile Shakib apologized for hurting the sentiments of his supporters. He also denied inaugurating puja mandap and sought forgiveness.

‘Media, social media everywhere it was flooded that I went to Kolkata to inaugurate a puja ceremony which actually was not the reason behind my visit and I did not inaugurate puja,’ Shakib said during the Facebook live.

‘Puja was inaugurated by Firhad Hakim, mayor of Kolkata. In my invitation card it was clearly mentioned that I was not the chief guest for puja,’ he said.

“Being a practising Muslim I always try to follow the religious customs. Please forgive me if I have done anything wrong” he said.