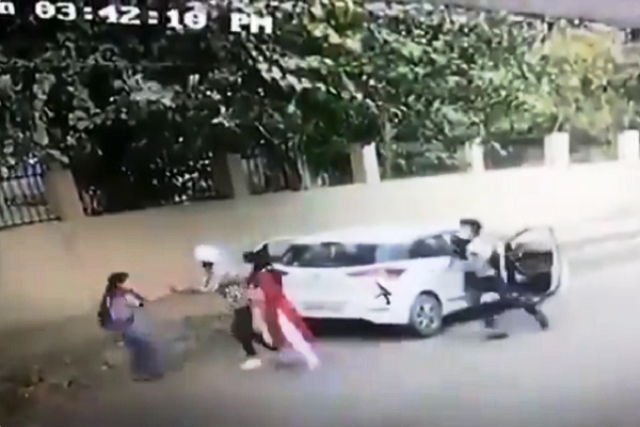 A 21-year-old college girl identified as Nikita Tomar was shot dead in broad daylight in Ballabharh, Faridabad by an accused allegedly identified as Taufeeq. He has now been arrested by the cops.

CCTV footage shows a girl named Nikita Tomar being shot dead by an assailant (Taufeeq) outside her college in Ballabgarh, Faridabad. Shooter and associate flees in car. Police have arrested Taufeeq. pic.twitter.com/idOPIDZfDo

In the aforementioned video the victim can be seen attempting to flee from the clutches of a man with a white headgear having a revolver in his hand. He is then seen shooting Nikita and then fleeing in a car along with his associate.

The incident reportedly took place on Monday (26 October) when Nikita came out of her college campus after giving an exam. She was a final-year B-Com student.

She was rushed to a nearby hospital but was declared dead. The accused reported shot her dead after she resisted his kidnapping attempt.

As per ACB Ballabgarh Jaiveer Rathi, the accused Taufeeq hails from Sohna and Nikita's family members had filed a molestation and harassment complaint against him a few months ago.

"One of the accused identified as Taufeeq hailing from Sohna was known to the victim and a complaint against him had been lodged by the victim’s kin a few months ago for harassment and molestation but a compromise had been reached", Rathi has been quoted as saying.

Reports have claimed that Taufeeq was Nikita's classmate till Class 12 and was pressurising her to become his friend. When she refused, he had allegedly kidnapped her in 2018. Her family had reportedly agreed to a compromise back then.