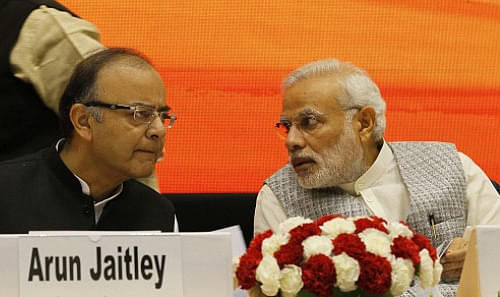 Due to unexpectedly low revenue collections and higher revenue expenditure, the government breached its fiscal deficit target for 2017-18, set at 3.2 per cent of the gross domestic produce (GDP), in November, Mint has reported.

Fiscal deficit between April and November this year was 112 per cent of its Rs 5.5 trillion target for the current fiscal year 2017-18, data released by the Controller General of Accounts has shown. During the same time, revenue deficit was 152 per cent of the Rs 3.2 trillion full-year target, suggesting that the government may also miss the revenue deficit target set at 1.9 per cent of GDP for 2017-18.

The government is planning to borrow Rs 50,000 crore long-term funds through government securities, the finance ministry said on Wednesday. This, analysts suggest, may raise the fiscal deficit by 30 basis points to 3.5 per cent of GDP.

The Finance Ministry may have to recalibrate its plan of achieving a fiscal deficit of 3 per cent of GDP by the fiscal year 2018-19.

Goods and Services Tax collection stood at Rs80,808 crore in December, down 14 per cent from the collection in August. Tax collections have also gone down in April-November period and stood at 57 per cent of the full-year target from 58.9 per cent during the same period in the fiscal year 2016-17. The government has, however, managed to raise about three-fourths of the targeted Rs 72,000 crore through disinvestment.