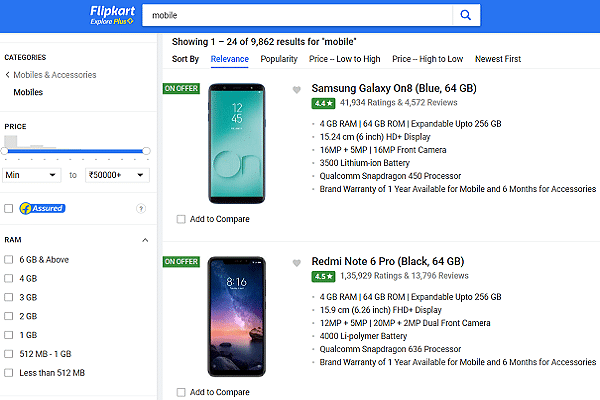 Screengrab of mobiles being sold on Flipkart (Official Website)

However, findings of the IDC “Consumer PULSE” also reveals that for the premium smartphone segment, priced over Rs 30,000, consumers prefer Amazon.

The study on smartphone consumer trends in India is based on the responses of 1,700 consumers across eight major Indian cities.

The research also shows that out of every three consumers, one consumer checks availability of good deals as well as the experience of latest specification or feature as the main reason to purchase a new smartphone.

The report reveals that around 50 per cent of the consumers who took the survey, upgraded from their previous Rs 10,000-Rs 20,000 smartphones to the premium segment.

Mehta added that RAM and processing speed are the most sought after features followed by the battery capacity and superior camera quality. Features like face unlocking and water resistance are yet to gain importance among consumers, he said.

The report finds that word of mouth continues to be the most influential source for consumer to buy a smartphone.

The research points that One Plus is the most wanted premium brand for Android consumers.