‘For Your Tomorrow, We Sacrificed Our Today’: National War Memorial Ready, Inauguration Likely On 25 January By PM Modi 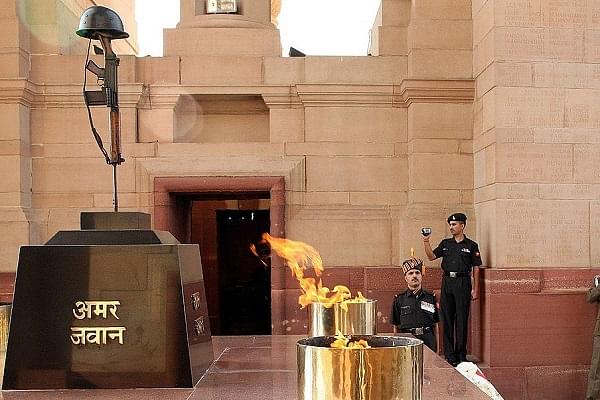 Around sixty years after first proposal by the armed forces, the National War Memorial (NWM) is now ready to honour over 22,600 soldiers who gave their supreme sacrifices in wars and operations since Independence, Times of India has reported.

According to the report, Prime Minister Narendra Modi is expected to inaugurate the NWM, adjoining the India Gate complex on Rajpath in national capital, on 25 January,

“India was probably the only major country not to have a NWM,” a senior officer was quoted in the report as saying.

The NWM was approved by Modi government in October 2015 and is built at a cost of Rs 176 crore. The memorial was initially scheduled to be inaugurated on 15 August 2018, but missed its completion deadline.

It is built keeping in view the “aesthetics and sanctity” of the Central Vista and India Gate. The memorial has a layout of four landscaped concentric circles spread over 40 acres.

The adjoining India gate was constructed by the British in memory of 84,000 Indian soldiers killed during the World War I and the Afghan campaign. The Amar Jawan Jyoti was built under the arch of India gate to honour the 3,843 soldiers who died during Bangladesh liberation war of 1971.