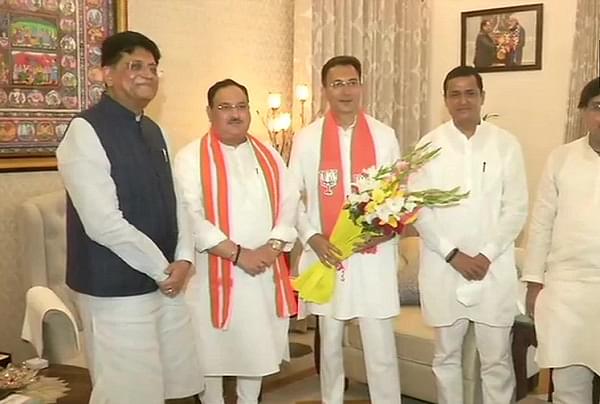 The development has garnered attention as Jitin Prasada hails from Uttar Pradesh state, which goes to the polls in early 2022.

"I have a three-generation connection with Congress, so I took this important decision after a lot of deliberation. In the last eight to ten years I have felt that if there is one party that is truly national, it is BJP. Other parties are regional," Jitin Prasada said.

"I felt that there is no relevance to stay in a party if you can't protect the interests of your people or work for them. I felt I was unable to do that at Congress. I thank people in Congress who blessed me all these years but now I'll work as a dedicated BJP worker," he added.

The 47-year-old Jitin Prasada worked as a secretary in the Indian Youth Congress in 2001 for the first time. In 2004, he contested the 14th Lok Sabha elections from his home seat Shahjahanpur and won. He was appointed Union minister of state, steel, in 2008.

In 2009, Prasada succeeded in the 15th Lok Sabha elections from Dhaurahara and then has been the Union Minister of State in the Ministry of Road Transport and Highways from 2009 to January 2011, Ministry of Petroleum and Natural Gas from January 2011 to October 2012 and Ministry of Human Resource Development from October 2012 to May 2014.

Interestingly, Hindustan Times reported that the last assignment of Jitin Prasada was to handle the recent West Bengal elections where the Congress performed poorly by decreasing its tally to zero from 44 seats it won in the 2016 elections.