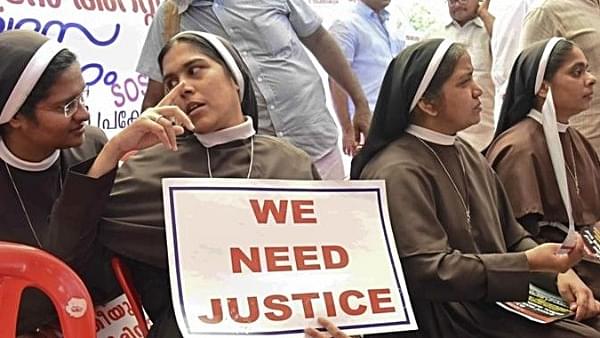 Four out of the five nuns who had protested against rape accused Bishop Franco Mulakkal, have been asked to leave the Kuruvilangaadu convent located in Kottayam, reports The Hindu.

The five nuns belonging to the Missionaries of Jesus, had earlier protested against the Bishop and came out in public against the Church for deliberately trying to deny justice to the victims.

The sisters, after receiving the transfer order, accused the Church of “taking vengeance for their public protests” and said that they would stay back at the convent to ensure justice to the victim.

The nuns were issued the transfer orders last year but have now received individual letters informing them that the congregation seeks to enforce them.

Earlier, in what was seen as a highly vindictive move, Sister Lucy Kalapura, the nun from the Syro Malabar Church, who spearheaded the protests against rape-accused Bishop Franco Mulakkal, has been slapped with a notice by the Church in Kerala.

Sister Lucy has been asked by her Mother Superior, Ann Joseph FCC, Superior General of the Franciscan Clarist Congregation (FCC), to explain her activities in relation to the protest against Bishop.

Sister Lucy and a few other nuns had staged a hunger strike near the High Court premises in Kochi for weeks last year demanding the immediate arrest of Mulakkal.