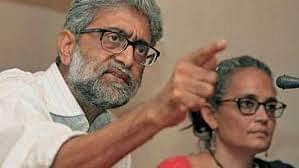 Navlakha is facing a case over connections with Naxalite groups. He was charged under Unlawful Activities Prevention Act and had received protection from arrest till 23 July by the court. On Wednesday, it was extended till further orders by a division bench of justices Ranjit More and Bharati Dangre.

Pune police claimed that the inflammatory speeches made at Elgar Parishad conclave on 31 December 2017 led to the violence near Bhima Koregaon war memorial next day, and that the conclave was supported by Maoists.

The counsel of Pune police Aruna Pai said that some of the documents seized from the laptops of Rona Wilson and Surendra Gadling showed that Navlakha had conducted "bilateral talks" with Hizbul leaders.

"He has been liaising with banned terrorist organisations including Hizbul Mujahideen since 2011,” she said, adding that between 2011 and 2014, Navlakha ha also been in touch with Syed Ali Shah Geelani and Shakil Bakshi.

Navlakha’s counsel Yug Choudhary denied all the charges while Pai contented that court-ordered protection from arrest was coming in the way of investigation.