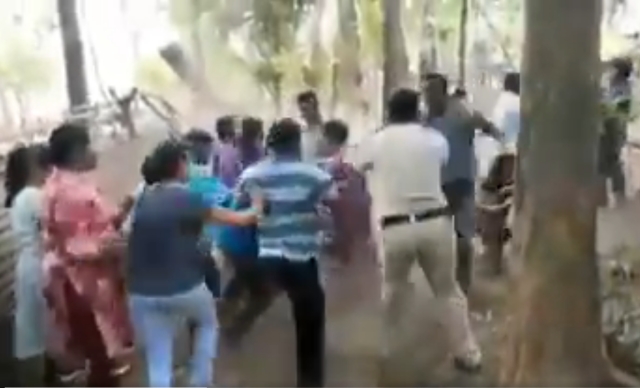 A screenshot from the video

A video surfaced on social media allegedly showing a mob of over 80 parishioners led by Parish Priest Fr Lewis Alvares in Goa attacking and beating Dr Kaidas Vaigankar and family over latter’s PIL against the Sancaole Church.

Vaigankar and his associate from Niz Goenkar Party, Chandrashekar Vasta, have mentioned in the police complaint that the church priest led a mob of parishioners to attack them, reports India Expose. They alleged that the attack was orchestrated by the Christian priest in response to his PIL over inconvenience caused to the residents of Sancoale village due to Sancoale Feast Day celebrations. The PIL demanded shifting the celebrations to a different location.

“Fr Lewis Alvares entered Dr Kalidas’s property with mob and even though police were called and happen to arrive at the scene, they did not stop the mob from their brutal act of beating Dr Kalidas and his family,” expressed Vasta.

A counter-case has also been filed by an auto-rickshaw driver who alleged that Vaigankar attacked him first after which the mob gathered. The police is investigating both sides of the story.

Previously, the Church of Our Lady of Health had complained against Vaigankar and his associates for running a cow-shed behind the church. Vaigankar may have also antagonised the church members by raising his voice against the illegal cross planting on different lands.