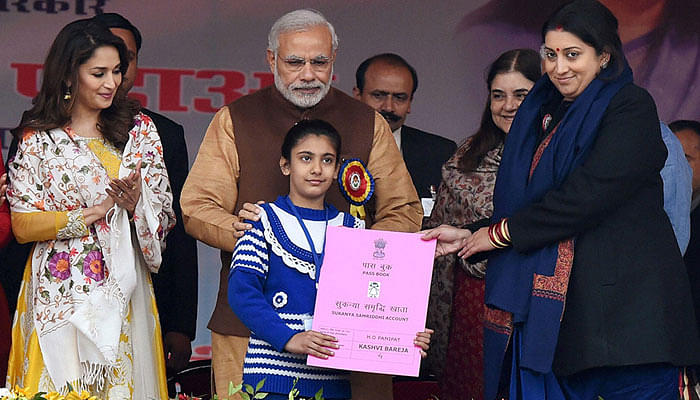 The government today claimed that there has been an improvement in sex ratio at birth in 104 districts selected for the Beti Bachao, Beti Padhao (BBBP) scheme, which aims at checking female infanticide and educating the girl child.

"An increasing trend in Sex Ratio at Birth (SRB) is visible in 104 districts, 119 districts have reported progress in registration of pregnancies in the first trimester and 146 districts have shown improvement in institutional deliveries," Secretary, Women and Child Development (WCD) Ministry, R K Shrivastava told reporters.

The WCD ministry now plans to extend this programme all the districts of the country.

The senior official was comparing 2016-2017 figures with those of 2015-2016. The data for the above three parameters is derived from health ministry's Health Management Information System (HIMS).

The BBBP scheme is one of Prime Minister Narendra Modi's pet projects and was launched by him in January 2015 in Panipat, Haryana. It focuses on districts with the worst child sex ratio (CSR) as per the 2011 Census.

The goal of the programme is to address the issue of the decline in child sex ratio in critical districts through an awareness campaign as well as multi-sectoral interventions, which include registration of pregnancies in the first trimester, increased institutional deliveries, and prohibition of sex- determination.

SRB is the number of girls born for every 1,000 boys and is recorded at birth. This data is collected annually. CSR is recorded for a population in the age group of 0 to 6 years and is collected once in 10 years. It is primarily influenced by SRB and mortality in early childhood.

Haryana, which has the worst child sex ratio according to the 2011 census (834 girls for every 1000 boys against the national average of 918), has shown improvement in sex ratio at birth in 18 of the total 20 districts selected in the state for the programme. The other two districts have shown a decline, according to Joint Secretary, WCD, K Moses Chalai.

"Ten years of SRB is equal to CSR. So naturally, if SRB improves it will result in an improved CSR. While we can't compare CSR with SRB we have seen that broadly SRB for two years is on an improving trend and above the CSR of 2011," Moses Chalai told reporters.