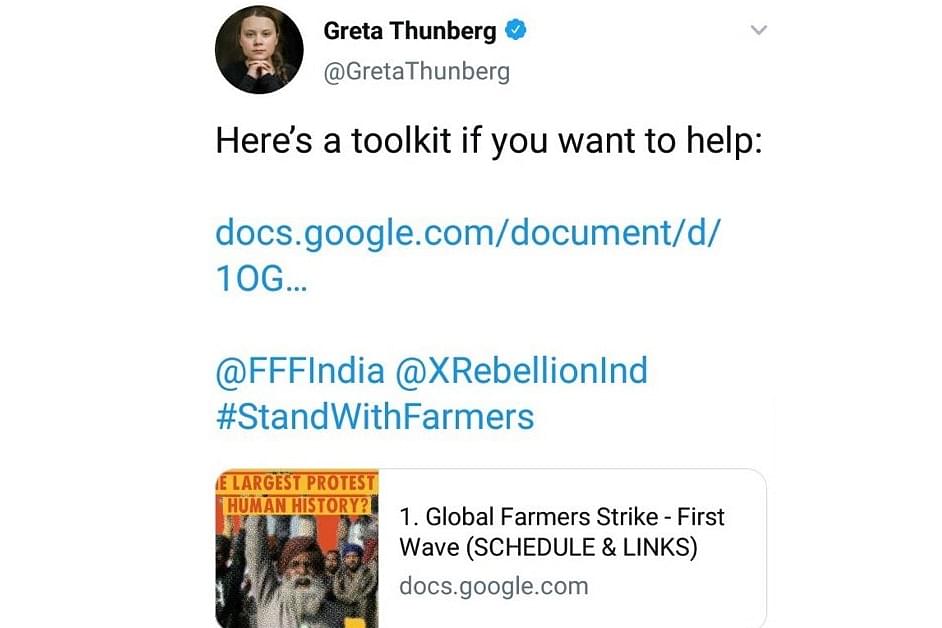 Swedish youth activist Greta Thunberg shared a toolkit on social media for the farmer protests in India which indicates that a widespread campaign may have been on much before 26 January.

Twitter erupted in India after the toolkit surfaced which included a document on details of 26 January protests and online and street protests. The document was restricted thereafter and the tweet was deleted, as per reports.

The document details how and where the protests should be done outside Indian missions abroad, media houses, government buildings and even Adani-Ambani offices.

After comments made by Rihanna and Thunberg, the Ministry of External Affairs issued a statement, saying: “Yet, it is unfortunate to see vested interest groups trying to enforce their agenda on these protests, and derail them. This was egregiously witnessed on January 26, India’s Republic Day. A cherished national commemoration, the anniversary of the inauguration of the Constitution of India, was besmirched, and violence and vandalism took place in the Indian capital.”

“Some of these vested interest groups have also tried to mobilise international support against India. Instigated by such fringe elements, Mahatma Gandhi statues have been desecrated in parts of the world. This is extremely disturbing for India and for civilised society everywhere,” the MEA said.

“Before rushing to comment on such matters, we would urge that the facts be ascertained, and a proper understanding of the issues at hand be undertaken. The temptation of sensationalist social media hashtags and comments, especially when resorted to by celebrities and others, is neither accurate nor responsible,” MEA said in the statement.