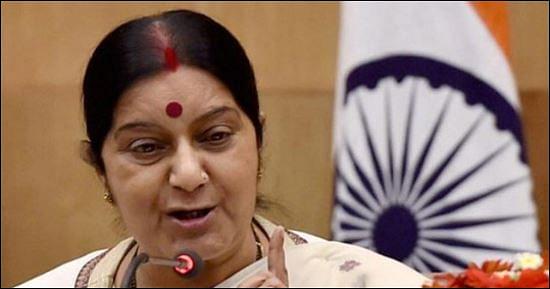 After two teenage Hindu girls were abducted and forcibly converted in Pakistan’s Sindh, minister of external affairs Sushma Swaraj had put out a tweet asking details from the Indian envoy in Pakistan about the matter.

Although the minister had addressed Indian High Commissioner in Pakistan, Pakistani minister Ch Fawad Hussein responded saying that the issue was an ‘internal matter of Pakistan’. He went on to say that it was Imran Khan’s ‘Naya Pakistan’ not Modi’s India where minorities are subjugated. He ended the tweet saying “ I hope you will act with same diligence when it comes to rights of Indian Minorities”.

Mam its Pakistin internal issue and rest assure its not Modiâs India where minorities are subjugated its Imran Khanâs Naya Pak where white color of our flag is equally dearer to us.I hope you ll act with same diligence when it comes to rights of Indian Minorities https://t.co/MQC1AnnmGR

Swaraj was quick to retort and pointed out that she had just asked the Indian High Commissioner in Islamabad for a report on the kidnapping and forced conversion of two minor Hindu girls to Islam. She said that that such a simple act was enough to make Hussein “jittery” shows his ‘guilty conscience’.

Mr.Minister @fawadchaudhry - I only asked for a report from Indian High Commissioner in Islamabad about the kidnapping and forced conversion of two minor Hindu girls to Islam. This was enough to make you jittery. This only shows your guilty conscience. @IndiainPakistan

The Pakistani minister then replied back saying he was happy that in Indian administration we have people who care for minority rights in other countries, adding “ Gujarat and Jammu must weigh heavily on your soul”.

Post the twitter spat, India sent a note of protest or “note verbale” on Sunday asking Pakistan to take “remedial action” to ensure the safety of its citizens from minority communities, reports The Hindu.