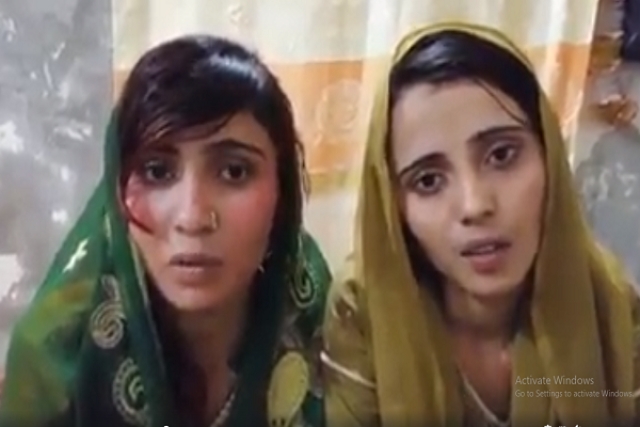 A video has surfaced showing the girls sitting with their husbands and a Maulvi or Islamic preacher justifying the act. The preacher says that the girls wanted to convert to Islam but ‘were not afforded the opportunity’. He adds that the girl themselves walked into the Dargah Bharchundi Sharif in Daharki and were married off on their own free will.

The maulvi said that the girls’ family is spreading ‘false propaganda’ and poses danger to the life of the girls. He said that since the girls had accepted Islam, they were now all Muslims’ responsibility.

The Islamic shrine of Khanqah-i-Aalia Qadria Bharchundi Sharif, Daharki has been notorious for such forced conversions. Previously many underage Hindu girls have been converted and married off in the same manner here. The case of Rinkle Kumari in 2012 and Rani in 2014 brought the issue of forced marriage and conversion of underage Hindu girls to the limelight, but no action was taken, allege Hindu residents.

The shrine’s Pir Abdul Haq aka Mian Mitho has been mired with allegations of condoning and encouraging such illegal acts. He wields political influence and has reportedly fought and won elections from the area.

While the religious leaders maintain that the conversion and marriage is out of own free will, the Hindu community in the area alleges sinister designs against them. Pakistani newspaper Dawn quoted a local journalist as saying, “..this is more of a business, where everyone knows what’s happening but no one can report or speak about it openly.”

In another video, the father of the girl is allegedly seen wailing in front of the police station, helplessly crying for his teenage daughters.

Father of Raveena and Reena Hindu girls who held protest at police station.

âYou can kill me, I had the patience, but now I wonât leave.â

I spoke to his son Shaman who said that âMadam - we are not citizen of Pakistan.â âThe police kept changing statements.â pic.twitter.com/ODWfIalnyJ

The Hindus in Sindh area have also reportedly organised a sit-in protest. The alleged persecution of Hindu minority in Sindh has an added layer of socio-economic deprivation. The Hindu tribes in the area are one of the poorest groups in the country.

The surfaced videos caused an outrage among the Twitterati who lambasted Pakistani prime minister Imran Khan over his promises of ‘naya Pakistan’ and treating minorities better.

The issue sparked discussions on history of Hindu persecution, Hinduphobia perpetrated by monotheistic religions, poor state of Hindu minority in Muslim majority counties in the subcontinent along with discussions over ‘Love jihad’, radical Islam and ‘demographic destiny’.