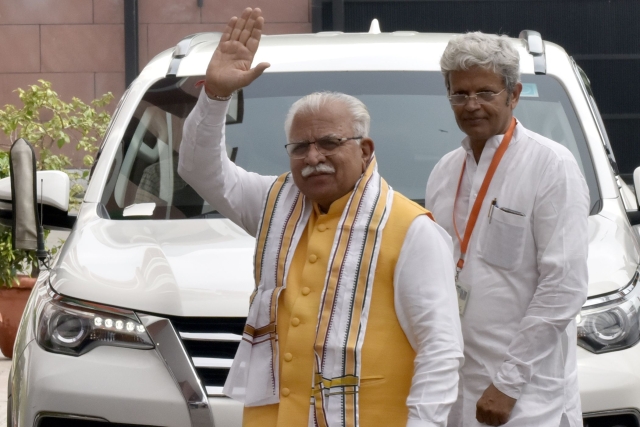 After 18 days of dilly-dallying, the BJP-led Khattar government in Haryana on Thursday (14 November) did the first Cabinet expansion by inducting 10 council of ministers, comprising one from its alliance partner, lone woman and an Independent.

The cabinet can have 14 members, including the Chief Minister and the Deputy Chief Minister, with two slots kept for the future expansion.

Governor Satyadeo Narain Arya administered oath to six Cabinet ministers and four Ministers of State (Independent charge) at a simple ceremony in Raj Bhawan that lasted less than an hour.

The government now has eight BJP ministers besides Chief Minister Manohar Lal Khattar (65), who is at the helm for his second consecutive term.

The inducted council of ministers were six-time Ambala (Cantonment) legislator Anil Vij, who was Health Minister in the previous government; former Speaker and three-time Legislator Kanwar Pal Gujjar, who belong to the Other Backward Class category, and BJP's Dalit face Banwari Lal, who was previously a minister of state.

Khattar and Vij are from the Punjabi community.

The other Cabinet ministers from the BJP quota were two-time Legislator Mool Chand Sharma and first-timer J P Dalal.

The lone woman in the cabinet is BJP's Kamlesh Dhanda, who belongs to the Jat community that comprises 28 per cent of the state's population. Her husband Narsingh Dhanda was a former minister. JJP's Dhanak was inducted as the Minister of State.

The lone Independent who got the Cabinet berth was Ranjit Chautala, estranged brother of INLD President O P Chautala. He was a minister in the Devi Lal cabinet. BJP's first-time Legislator and former Indian hockey captain Sandeep Singh, who produced incredible flicks, inducted into the government as a Minister.

A day before the cabinet expansion, the Governor allocated 11 portfolios, including key departments of Revenue and Disaster Management, Excise and Taxation and Industry to Dushyant.

The Chief Minister kept Home, Finance, Urban Local Bodies and Town and Country Planning with him. Both Khattar and Dushyant took oath of office on 27 October.