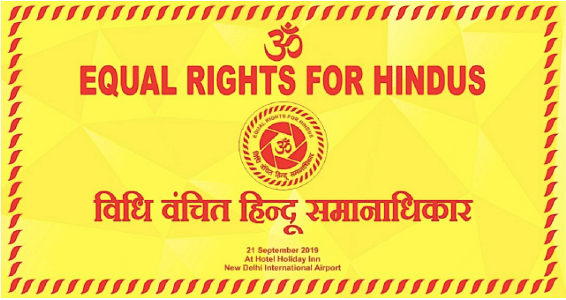 Hindu Charter is set to organise a National Conference on Equal Rights for Hindus on Saturday (21 September) in New Delhi, reports OpIndia. The objective of the conference will be to seek amendments in the Indian Constitution to eliminate discrimination against the majority community.

A draft resolution and Constitution (Amendment) Bill for the amendment of articles 12, 15, 19, and 25 to 30 is to be prepared at the conference keeping six main subjects in mind. The conference will take place at the Hotel Holiday Inn, Aerocity in New Delhi.

The National Conference for #EqualRightsForHindus is just the pehla padaw of a long Yatra, which we have to undertake together to ensure that India, that is Bharat, truly remains Bharat. We look forward to your presence, participation, engagement and encouragement. ð pic.twitter.com/XPFlwQewZF

Some of the issues include Rights of citizenship of persecuted adherents of indigenous religions of India, Selective Undue Interference by the State & Judiciary in Customs and Practices of Hindus, Control and management of Hindu Temples & Religious Institutions and misappropriation of their properties for secular purposes by the Indian State, Indian State Facilitating Conversion of Hindus by Sectarian Public Funding, and Fragmentation of Hindu society by denying Hindus the Right to administer Educational Institutions without Undue State Interference.

The main issues to be addressed at the conference have been aimed towards the sustenance and continued existence of the Hindu Civilisation. The conference will also highlight the long-going institutional bias against Hindus in the country, mainly due to certain laws brought in by the previous Congress governments.

Claiming it to be an advocacy and activist conference, the organisers state, “the panelists have a higher responsibility to unequivocally articulate the issues for formulation of actionable policy and legislative suggestions.”

According to OpIndia, the conference is expected to create awareness among a large section of people “about these civilisational issues, so that more and more people are informed of the deep discrimination of existential concern for our indigenous religions (such as Hinduism, Buddhism, Jainism, Sikhism), culture and our ancient civilisation which are primarily informed by Sanatana Dharma.”

The conference sessions will be live-streamed on the YouTube channel of Hindu Charter.