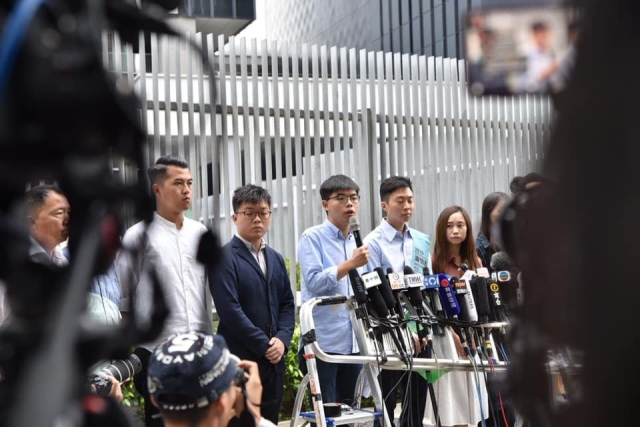 The Hong Kong government on Tuesday (29 October) banned activist Joshua Wong, one of the most prominent faces of the pro-democracy movement in the city, from running in the upcoming district-level elections.

"The candidate cannot possibly comply with the requirements of the relevant electoral laws, since advocating or promoting 'self-determination' is contrary to the content of the declaration that the law requires a candidate to make to uphold the Basic Law (the city's constitution) and pledge allegiance to the HKSAR (Hong Kong's official name)," District Officer Laura Liang Aron said in a statement.

The 22-year-old activist, the only candidate who won't be able to run for a seat on the district council on 24 November, said in a post on Twitter on Tuesday (29 October) that the ban "proved how Beijing manipulate the election with political censorship and screening", Efe news reported.

Wong rose to fame for his role in the pro-democracy Umbrella Movement in 2014, which sought universal suffrage in the election of the city's head of government.

He has gone on to become one of the most influential leaders in the pro-democracy movement in Hong Kong, which has been witnessing near-daily protests over the last four and a half months.

The protests, which have been drawing massive crowds since June following a contentious proposed extradition law that has been pulled by the government, have mutated into a movement that seeks to improve the democratic mechanisms that govern Hong Kong and safeguard - or expand - the region's partial autonomy from Beijing.

However, some demonstrators have opted for more radical tactics than peaceful civil disobedience and violent clashes with the police have been frequent.

In 2018, the Hong Kong government had disqualified the candidacy of another pro-democracy activist, Agnes Chow, for the Legislative Council by-election in March of the same year due to her stance on advocating self-determination for the former British colony.

The Basic Law, Hong Kong's constitution, states that the city is an inalienable part of China but guarantees the rights and freedoms of the citizens of the semi-autonomous city under the principle known as 'One Country, Two Systems'.

However, the text commits to moving towards universal suffrage.