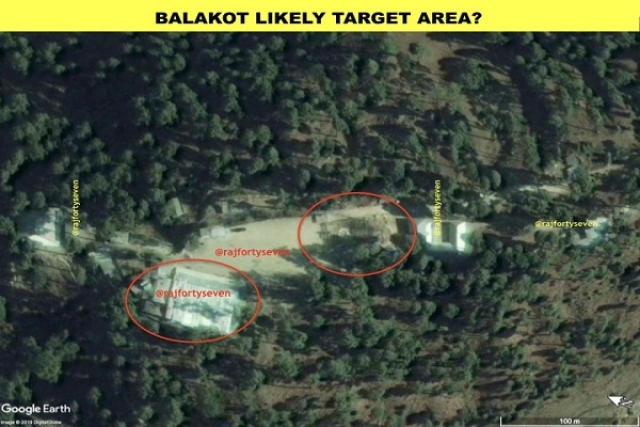 The Indian Air Force hit four buildings it had targeted inside the campus of Madrasa Taleem-ul-Quran housing terrorist training camps at Balakot in its retaliatory and preemptive attack against Jaish-e- Mohammad, reports Indian Express.

However, the limitations on technical intelligence and lack of ground intelligence have made it difficult to assess the number of terrorists killed, said the report.

The buildings were in the campus of the madrasa run by the Islamist terror group which is located on the same ridge line as the hilltop, a few hundred metres to the east.

Pakistan had also reportedly confirmed that India struck the area, but denied the presence of any terror camps.

“Why did the Pakistan Army seal the madrasa after the strike? Why did it not allow journalists to visit the madrasa? We have evidence in the form of SAR imagery to show that a building used as a guest house, where brother of Maulana Masood Azhar used to stay; an L-shaped building where trainers used to stay; a double-storied building used to house students entering the seminary and another building where those undergoing final combat training used to stay, were hit by the bombs,” an official was quoted saying.

‘It is for the political leadership to decide if it wants to release that imagery and make public what is a ‘classified’ capability. The SAR images are not as clear as satellite pictures and we couldn’t get a good satellite picture on Tuesday because of heavy clouds. That would have settled the debate,” the official added.

The report also states that contrary to Pakistani claim, instead of going into the Pakistani territory, India fired the PGM bombs from the Indian side of the LoC. IAF review suggests that closest Pakistani aircraft was 120 km away.

It is estimated that Pakistan Air Force had been misled by a decoy “airstrike” by IAF feigning movement towards a city in southern Punjab. In response, Pakistan scrambled its aircraft to that direction leaving the space on the LoC open for the attack.

An official also explained that the government created a “dark corridor”, that is, a long circuitous route for the IAF to move such a large fleet of aircraft to the target area, in order to avoid suspicion and monitoring by international civilian flights.

The official also stated that Indian side was fully prepared for any kind of retaliation from Pakistani side. Likely targets were warned and air defence units, and ground defence units were put on the highest alert.