‘I Have To Give You Re 1 For Winning The Case’: Harish Salve Recounts Emotional Conversation With Sushma Swaraj 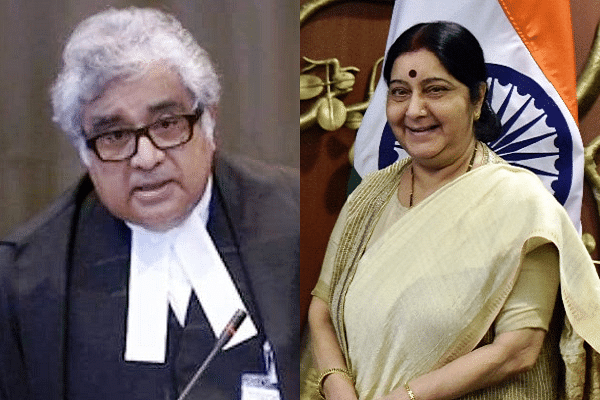 Hours before she breathed her last, former external affairs minister Sushma Swaraj had an emotional conversation with noted lawyer Harish Salve who represented India at the International Court of Justice (ICJ) in Kulbhushan Jadhav.

In the conversation, Swaraj had asked Salve to come and collect his nominal fee of Re 1 which the latter had charged for the case, reports Hindustan Times.

Swaraj passed away later that evening.

“I spoke to her at 8:50 pm. It was a very emotional conversation…. She said you have to come and meet me. I have to give you your one rupee for the case which you won. I said, of course, I have to come to collect that precious fee. She said to come tomorrow at 6 o’clock,” said Salve, following the demise of Swaraj.

Swaraj was instrumental in fighting for Indian national Kulbhushan Jadhav detained by Pakistan. She had availed the services of Salve to fight India’s case at the ICJ, who only charged a nominal fee of Re 1.

After ICJ overwhelmingly ruled in India’s favour, a delighted Swaraj had said, “I wholeheartedly welcome the verdict of International Court of Justice in the case of Kulbhushan Jadhav. It is a great victory for India.”