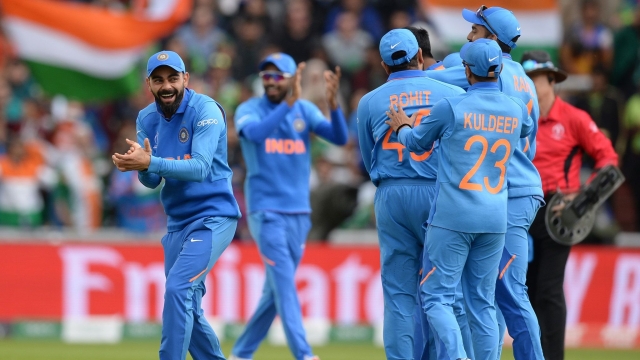 It was a gloomy day in Manchester for the Pakistan Cricket team and their fans as India extended their head-to-head record against their arch-rivals to seven games in the cricket world cup.

A masterclass innings from Rohit Sharma (140) and two wickets at a crucial time for spinner Kuldeep Yadav ensured India won the most awaited game of the cricket world cup by 89 runs (DLS).

After winning the toss on a gloomy day in Manchester, Pakistan captain Sarfaraz Ahmed put India to bat. Rohit Sharma and KL Rahul (51) opened to put a 136-run opening partnership.

A quick 77 by skipper Virat Kohli, which saw him reach 11,000 ODI runs (fastest-ever) and contribution from Hardik Pandya (26) ensured India totalled 335 on the board.

Indian bowlers Jaspreet Bumrah and Bhuvneshwar Kumar continued their good form and ensured Pakistan openers struggled. Vijay Shankar replaced Bhuvneshwar after he got injured while bowling, caught opener Imam-ul-Haq in front of the wickets in his first delivery.

Kuldeep Yadav then picked up two crucial wickets of Babar Azam (48) and (62) in quick succession at a period when Pakistan looked to come back in the game. Hafeez and Shoaib Malik departed cheaply in successive deliveries to Pandya, before Shankar bowled Sarfaraz Ahmed.

India capped up an overall team performance by winning by 89 runs on the DLS method after the second innings was reduced to 40 overs after rain disrupted the game.

In a world cup which has already seen three games washed out, leading to the cricketing fraternity questioning the ICC over the scheduling of the matches and lack of reserve days, the global cricket board would be thanking the rain gods for sparing them with a 90-over game.