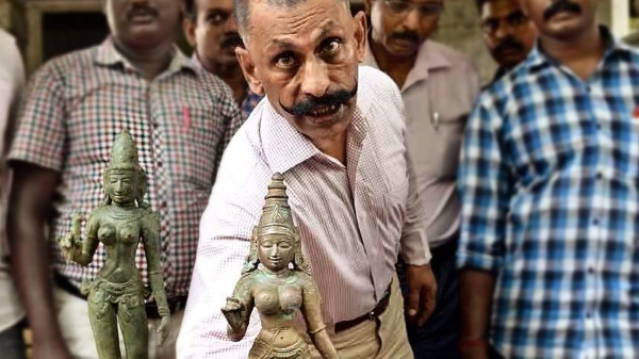 Special officer in-charge of the Idol Wing-CID and retired inspector general of police, Ponn Manickavel, has come down heavily on the Tamil Nadu government for its lackluster attitude to bringing back Hindu idols which have been stolen and smuggled abroad, reports The Hindu.

He made the comments after his appointment as the head of the idol wing was re-affirmed by the Supreme Court against a challenge by the state government. Manickavel spoke about how his team was completely deprived of resources to carry out their work, and had to spend their own money to get things like computer equipment.

He added that the Tamil Nadu government was uncooperative in disbursing funds in time so that idols smuggled abroad could be brought back to India.

“A Nataraja idol was sold to a museum in Adelaide in 2001 for ₹30 crore. The museum was willing to return it. I had written to former DGP Rajendran nine months ago, requesting funds to bring back the idol. But it was delayed inordinately and the idol couldn’t be brought back. We are working under tremendous pressure with no funds and manpower. I have been spending from my own pocket and pension even for commuting and food expenses of the team,” Manickavel said.

The officer also spoke of the plight of witnesses in idol smuggling cases, about how they were facing threats to remain silent. He said that if the state government did not ensure their safety then he would take the matter to the Madras High Court.