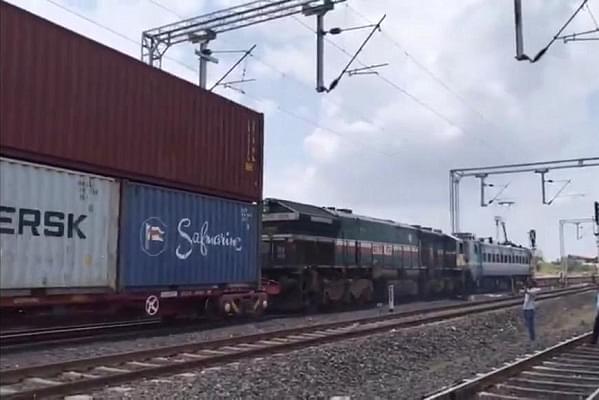 The Indian Railways has carried out a trial run of a double stack and double rake goods train on the western dedicated freight corridor between Krishnagarh and Rewari.

A video of the same was shared by senior railways official Ananth Rupanagudi.

In the video one can see the state-of-the-art WAG-12 locomotive hauling double stacked containers on the dedicated freight corridors.

The guard coach of the WAG-12 hauled container train was joined to another double stacked goods train hauled by a WAG-9 locomotive making it a double rake freight train.

As pointed out by Rupanagudi, the Indian Railways has had to modify the height of the overhead equipment (OHE) to accommodate the double stacked containers.

The commercial operation of goods service in the 306 km long section between Rewari and Madar are being flagged off by Prime Minister Narendra Modi.

The section to be inaugurated today (7 January) comprises 79 km in Mahendragarh and Rewari districts of Haryana and approximately 227 km in Rajasthan.

There are nine newly built stations in this section. The Western Dedicated Freight Corridor is meant for double stack container operation.

According to a senior railway official, the Western corridor would be used for long-haul double stack container operation to carry four times more goods as compared to the current traffic in the section.