In A Possible Bid To Keep His Party Intact, MK Stalin Attacks BJP’s Efforts To Saffronise The Country 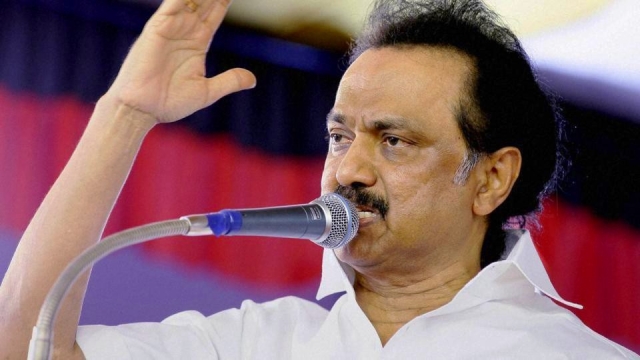 In an effort to distance himself and his party from the Bharatiya Janata Party (BJP), newly-elected Dravida Munnetra Kazhagam (DMK) President M K Stalin has asked his cadres to teach the Narendra Modi Government a lesson and remove the BJP-led government at the Centre along with the Edappadi K Palaniswami (EPS) government in Tamil Nadu.

Addressing his cadre soon after taking over as part president, Stalin, son of the late DMK patriarch Karunanidhi, said that Modi was trying to saffronise the country by attacking education, art, literature and culture using his authorities and communal forces, reported Economic Times.

Stalin’s attack on the BJP and Modi are seen as his efforts to keep his party cadre in good humour amidst speculations that the Dravidian party was inching closer to the ruling party at the Centre. Speculations doing rounds say that there could be at least post-poll alliance between the two. However, there are others who say that the BJP could align with the EPS-O Pannerselvam led All India Anna Dravida Munnetra Kazhagam (AIADMK) besides drawing support from Tamil Super Star Rajnikanth.

Stalin’s attack on Modi could his strategy to keep his party united as part of efforts to try and wrest power in the State from the AIADMK that is riven by factionalism with a section of legislators aligning with TTV Dinakaran, who has formed a party of his own after being expelled from the party.

The DMK leader is also facing an open challenge from his brother M K Alagiri, who has a good following in southern Tamil Nadu and has been expelled from the party. Besides, Stalin has to face a few key challenges among the voters, particularly upcoming byelections at Thiruparankundram and Tiruvarur.