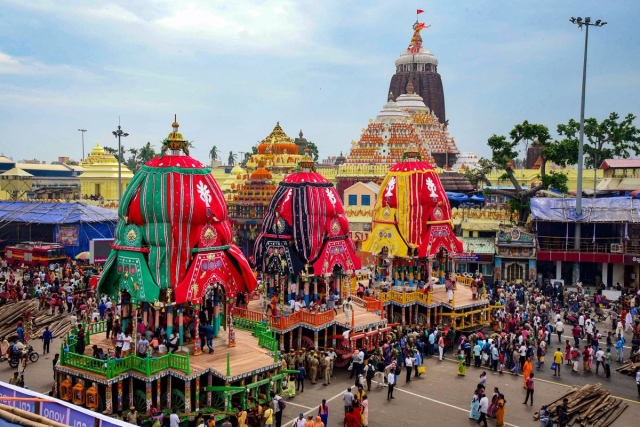 The pilgrims are flocking in Odisha’s Puri to celebrate the great annual nine-day Jagannath Rath Yatra that starts today, reports Times of India.

Puri bore the brunt of the cyclone Fani but still it has not deterred tens of thousands of ardent devotees arriving to witness the beginning of the chariot journey of Lord Jagannath and his siblings, Balabhadra and Subhadra, from the Temple of Jagannath to the Gundicha Temple, their birth place.

The Rathas are huge wheeled wooden structures, which are built anew every year and are pulled by the devotees. The chariot for Jagannath is approximately 45 feet high and 35 feet square and takes about 2 months to construct. The artists and painters of Puri decorate the cars and paint flower petals and other designs on the wheels, the wood-carved charioteer and horses, and the inverted lotuses on the wall behind the throne.

The state government with the support from center managed to organize the Rath Yatra even after such massive natural calamity which could have robbed the fan fare but damaged hotels, are back in business along with emergency services.

Puri district collector Balwant Singh said, "We have made foolproof preparations to host the mega festival. All requisite infrastructure and tourist amenities are in place. The devotees will have a smooth stay during the Rath Yatra."

Director general of police R P Sharma said “adequate security arrangements have been made , temporary CCTV cameras have been installed across Puri as the permanent ones were damaged in the cyclone and . "At least 155 platoons of police, including rapid action force (RAF), will be mobilised for crowd control, traffic management and security of pilgrims and VIPs.”