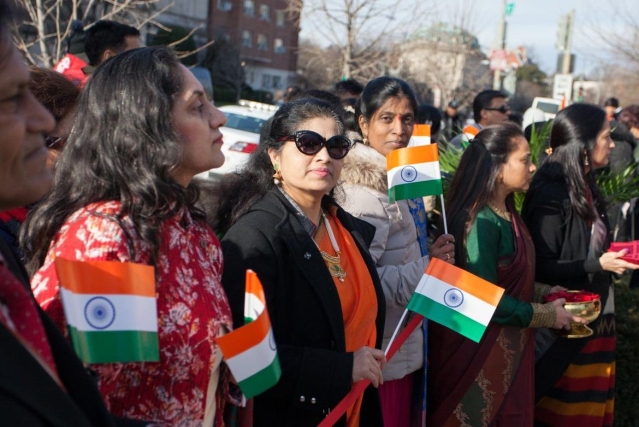 Indians in the US responded with a patriotic rally, against divisiveness. (@IndianEmbassyUS/Twitter)

A protest rally by Khalistani sympathizers on the Republic Day outside the Indian Embassy in Washington turned out to be a flop show, reports The Tribune. The Sikh separatists’ rally was attended by around 15-20 people, which was outnumbered by Indian-Americans waving flags.

According to the report, the rally was organised by the New-York based Sikhs for Justice (SFJ). Protesters at the rally were raising slogans hailing Khalistan. They also tried to burn the Indian Tricolour in the presence of reporters from the local Pakistani media, but ended up burning a green flag that had ‘S’ written on it.

However, Indian-Americans holding the Tricolour in their hands and chanting Vande Mataram and Bharat Mata Ki Jai outnumbered the Khalistani sympathizers.

“This demonstrates the hollow claim of SFJ that they enjoy wide support. They are a fringe group backed by Pakistan, clearly bringing out the nefarious design by Pakistan to stir trouble. In fact, most of the demonstrators were Pakistanis,” sources were quoted in the report as saying.

The local Sikh community also slammed the SFJ for the protest. “I am disturbed and concerned that a chosen few can build a narrative about the Sikh community in USA which will be viewed by the whole world,” said Puneet Ahluwalia, an Indian-American from Virginia.