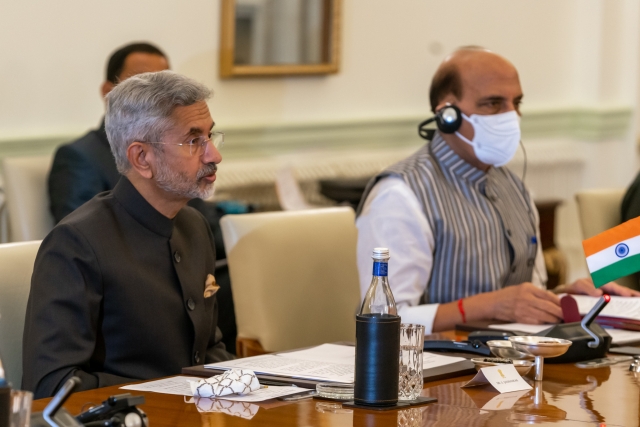 During the 2+2 dialogue between the defence and foreign ministers (secretaries in the US) of India and the US earlier today, Rajnath Singh labeled China’s actions in Ladakh over the last few months as “reckless aggression”.

“...we are challenged by reckless aggression on our northern borders,” the Defence Minister said, according to the US State Department’s transcript.

US Secretary of State Mike Pompeo and Defence Secretary Mark T Esper were in New Delhi today to meet Singh and Foreign Minister S Jaishankar for the third 2+2 dialogue. They also held talks with National Security Advisor Ajit Doval ahead of the dialogue with the Defence and Foreign ministers.

China’s aggression in the Himalayas and its aggressive moves elsewhere were discussed in the India-US meeting, reports said.

On Monday (26 October), Singh and Jaishankar held separate talks with their US counterparts. India and the US agreed to improve cooperation in India’s neighborhood to stem China’s rising influence in the region.

Pompeo will visit Sri Lanka, the Maldives and Indonesia before returning to the US ahead of the 3 November Presidential Election.

Pompeo and Esper visited the National War Memorial earlier today to pay tribute to India’s fallen soldiers. Speaking at the press conference after the 2+2 meeting earlier today, Pompeo said he paid tribute to 20 Indian soldiers “killed by the People’s Liberation Army in the Galwan Valley” in June this year.