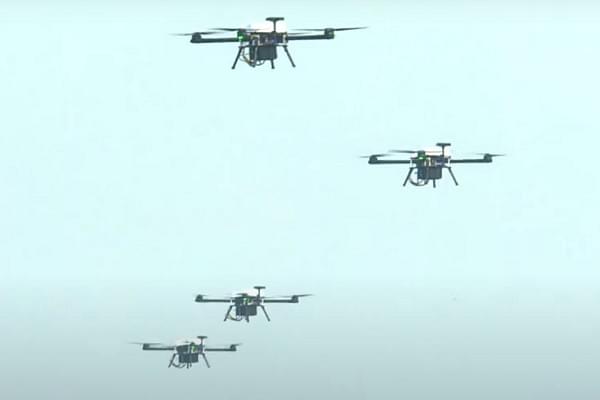 During the demonstration, 75 UAV and small drones were flown together in a large swarm through AI technology. These 'swarm drones' can be used for simultaneous large attacks on enemy tanks, ICVs, infantry combat vehicles and trucks loaded with soldiers and ammunition, as well can be used for supplying medicines and other equipment.

Swarm-drones can also be used to jam the enemy's communication-systems and radars on the battlefield.

It should be noted that swarm drones is a concept where a large cluster (or several clusters) of unmanned aerial vehicles (UAVs) are flown together in contested or hostile airspace, in order to confuse the radar with a bigger image of the actual target and to achieve their objective. These drones (or robots) work in tandem with each other and are controlled either manually or autonomously through processors on board.

Recently, the Indian Army selected SWITCH unmanned aerial vehicle (UAV) made by IdeaForge to fulfill its requirement of an unknown number of tactical drones for its infantry troops deployed in high-altitude areas like Ladakh.

The Indian Army will sign a Rs 140 crore deal with the Navi Mumbai-based Indian company for SWITCH UAVs, Livefist reports, adding that the number of drones to be supplied as part of this deal is likely to be in hundreds.