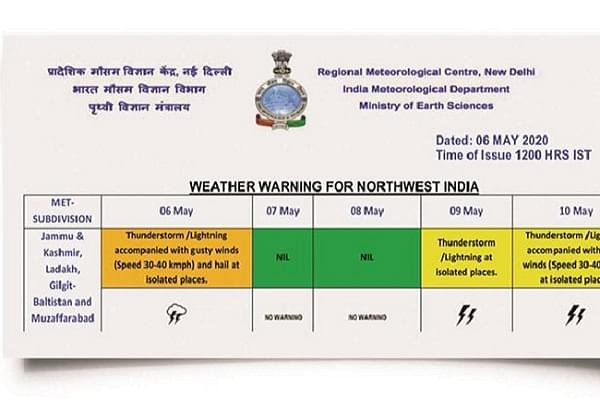 In a first, the Indian Meteorological Department (IMD) has specifically started listing territories illegally occupied by Pakistan in its weather reports like Gilgit-Baltistan and Muzaffarabad.

This process is said to have started from 5 May in its daily forecast. In the above image the subdivision which was previously simply known as Jammu and Kashmir, has now been named Jammu and Kashmir, Ladakh, Gilgit-Baltistan and Muzaffarabad.

Many have claimed that there is a subtle messaging behind IMD’s decision.

This development comes just days after India lodged a strong protest with Pakistan against the latter’s decision to allow elections in Gilgit-Baltistan.

In its statement to Pakistan the Ministry of External affairs made it clear that the Islamic Nation has no locus-standi on these territories. It also demanded that Pakistan immediately vacate all the territories illegally occupied by it.