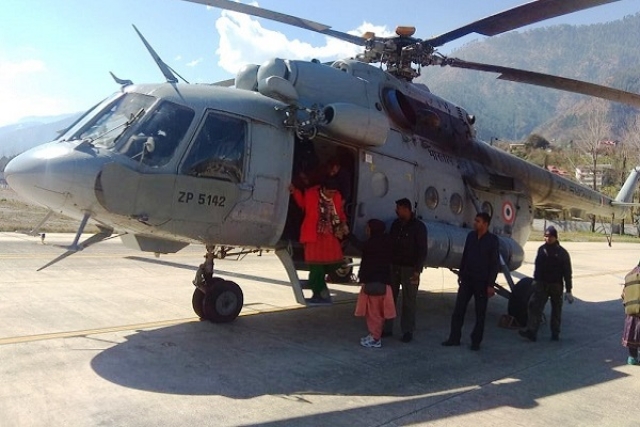 The Indian Air Force (IAF) on Saturday (9 March) airlifted residents in Himachal’s Lahaul-Spiti districts as roads in the area continue to remain closed due to heavy snowfall, ANI has reported.

Himachal Pradesh: Indian Air Force helicopter airlifted 22 people from Bhuntar in Kullu to Stingri in Lahaul-Spiti and 21 from Stingri to Bhunter today. Roads in Lahaul-Spiti and Manali-Leh highway are closed since past 2 months due to heavy snowfall this year. pic.twitter.com/II6t8TprLk

The IAF airlifted 22 people from Bhuntar town in Kullu district and dropped them at Stingri in Lahaul-Spiti. In another operation the IAF airlifted 21 residents in the opposite direction from Stingri to Bhuntar.

The roads on the Manali-Leh and Lahaul-Spiti stretches continue have remained closed for about two months due to heavy snowfall.

The Border Roads Organisation (BRO) is going to start operations to clear the Manali-Leh highway of snow. This road connects the Rohtang Pass with Lahaul. The BRO says that further snowfall has been predicted in the next few days and they are waiting for the weather to improve.

It was earlier reported that Himachal has seen a heavy bout of snowfall this year. The state capital Shimla had for example, recorded the highest level of snowfall in a single January day for the past 15 years.