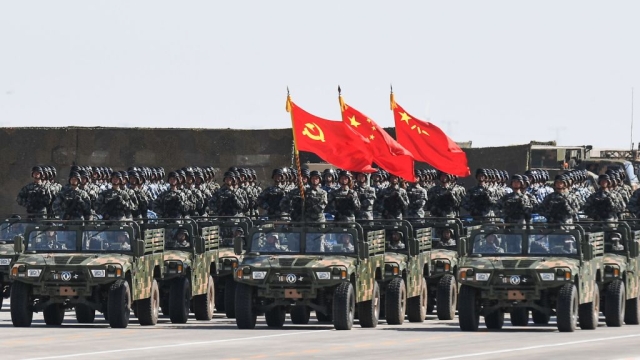 Chinese soldiers carry the flags of (L to R) the Communist Party, the state, and the People’s Liberation Army during a military parade at the Zhurihe training base in China’s northern Inner Mongolia region on July 30, 2017. (STR/AFP/Getty Images)

The Indian Army on Wednesday (4 September) gave a detailed rebuttal to media reports claiming that the Chinese army had managed to pull off an incursion 100 KM inside the Indian territory in Arunachal Pradesh.

This led to a lot of online frenzy which included a comment by a BJP Arunachal Pradesh MP claiming that China making a bridge at a distance of 25 km from Chaglagam, meant a China presence 60-70 km inside Indian territory.

Later in the day the Indian Army decided to step in an issued a press-release refuting the media reports and issuing a detailed explanation to clear misconception.

The Army release posted by journalist Shiv Aroor makes it clear that no such incursion reported by the media has occurred. It added that the area in question falls under the fish tail and is prone to differing perceptions of Line of Control (LOC) alignment.

The area laced with dense vegetation requires crossing on foot via nalas or streams. In the monsoon when these brooks are brimming with water, soldiers construct temporary bridges to aid their crossing.

As the area is disputed both Indian and Chinese soldiers patrol it from time to time and is also frequented by civilians during the summer months.

The Army clarified that there is no permanent presence of Chinese soldiers in the area and India maintains constant vigil to prevent such a scenario.