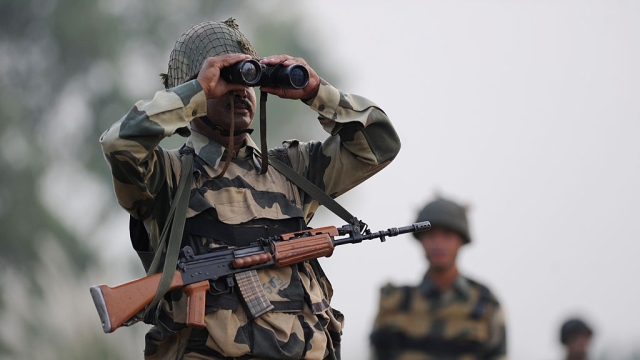 Indian Border Security Force (BSF) soldier looks through a binocular towards Pakistan during a patrol at the India-Pakistan border in R.S Pora, southwest of Jammu (TAUSEEF MUSTAFA/AFP/Getty Images)

Even as the Pakistani government has agreed to return captured pilot Wing Commander Abhinandan Varthaman, it has simultaneously continued a large-scale mobilisation of troops and military equipment such as tanks and armoured vehicles along the international border and the Line-of-Control (LoC) with India, reports The Economic Times. The country has also been moving civilians away from border areas.

As per an Indian official, Pakistan has readied a number of its defensive infantry units at the LoC, while also mobilising its strike formations near the border. India has responded with its own military mobilisation to be ready for any re-commencement of hostilities.

Near the LoC, Pakistan has moved forward its defensive formations such as the Rawalpindi-based 10 Corps and its Gujaranwala-based 30 Corps.

“Our ground-based defence systems have been put on alert along the LoC and some parts of IB, Mechanised formations too have been placed on standby. We are fully prepared to respond to any provocation by Pakistan,” stated Additional Director General Military Operations Major General SS Mahal.

Indian intelligence has been closely following Pakistan’s military movements through satellites. The Islamic republic’s mobilisation appears to be more concentrated near the border with Rajasthan.

The Lahore-based 4 Corps and the Karachi-based 5 corps are the formations that operate in these areas; these two corps also consist of offensive ‘strike’ elements including two armoured divisions.

A number of expressways in Karachi have been closed off to civilian traffic and are being repurposed to be used as runways for Pakistan Air Force (PAF) fighters.