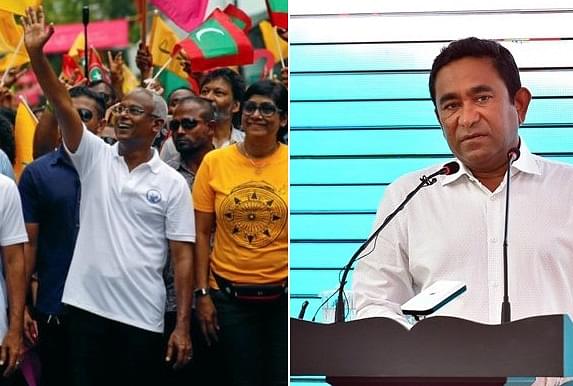 In the election held on Sunday, Maldivians ousted from power incumbent President Abdulla Yameen, who drove the country closer to China and into a debt trap. Yameen lost to the candidate fielded by the joint opposition.

Opposition candidate Ibrahim Mohamed Solih, a member of the Maldivian Democratic Party, secured 58.3 per cent of the popular vote in the election. Yameen lagged behind with 42 per cent of the votes.

“This is a moment of happiness, moment of hope, a moment of history. For many of us, this has been a difficult journey, a journey that has led to a prison cell or years in exile,” opposition candidate Solih was quoted as saying.

After assuming power in 2013, Yameen had jailed or forced into exile nearly all of his political rivals. In February, Yameen had rejected a court order to quash terrorism charges against nine major opposition figures, including former president Mohamed Nasheed, and jailed Supreme Court judges. The country’s Supreme Court had said that their trials were "politically motivated and flawed". This move forced the already united opposition to field a joint candidate.

Opposition’s campaign headquarters were raided on the eve of the election, which was being seen as a referendum on democracy.

Yameen had not shown sensitivity towards India’s security concerns. He signed a Free Trade Agreement with China without keeping India in the loop and gave Chinese firms multiple infrastructure development projects. Among other things, he had agreed to participate in China’s maritime Silk Road, part of the Belt and Road Initiative that India has opposed for creating unsustainable debts.

India’s displeasure can be gauged from the fact that the Maldives is the only neighbouring country that Prime Minister Narendra Modi has not visited. The government had decided against armed intervention in the Maldives despite multiple provocations from Yameen and was expecting his ouster in the elections. The government was criticised by various sections, including security experts, for not intervening. However, its bet seems to have paid off.

In 1988, the then prime minister Rajiv Gandhi dispatched 1,600 troops to the island nation to prevent a coup by mercenaries.