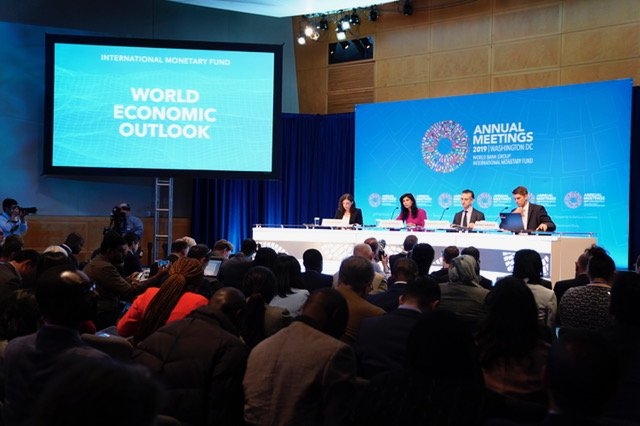 Milesi-Ferreti and IMF Chief Economist Gita Gopinath made optimistic projections for India's economy to pick up next year while addressing a news conference for the release of the IMF's World Economic Outlook (WEO) report in Washington.

According to the report, India and China with their projected growth rate of 6.1 percent for the current year share the top rank among major economies.

India's "overall growth remains very strong by the standards of the world economy even though it is lower than the very high standards to which we were accustomed to in looking at India," Milesi-Ferreti said, adding that that a "growth rate above six per cent is still notable and extremely important in a country that has such a large population".

This growth rate is in contrast to the global economy which, Gopinath said, is "in a synchronised slowdown, with growth for 2019 downgraded again - to 3 percent - its slowest pace since the global financial crisis".

The IMF has forecast "a further pick up next year" for India's economy helped by tax cuts on the corporate sector, he said.

"In our projections, we have that India would recover to seven per cent growth in 2020," Gopinath said.

In India "there has been a negative impact on growth that has come from financial vulnerabilities in non-bank financial sector and the impact that has had on consumer borrowing, borrowing by small and medium enterprises", she said.

The hike in growth projection for next year is based "on the premises that these particular bottlenecks will clear up," Gopinath said.