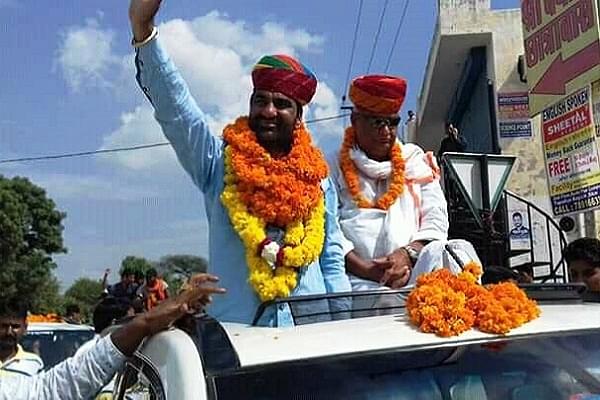 In a big boost to the electoral prospects of BJP in Rajastan, Rashtriya Loktantrik Party (RLTP) leader Hanuman Beniwal announced today (4 April) that he will ally with BJP for the upcoming Lok Sabha elections.

Beniwal made the announcement in a press conference attended by Union HRD Minister Prakash Javadekar, who is in charge of the party affairs in the state and Rajasthan BJP state unit president Madanlal Saini.

Beniwal will contest upcoming elections from Nagaur Lok Sabha constituency. Political observers in the state believe that influential Jat leader‘s decision to ally with BJP is likely to make the battle tough for ruling Congress party in at least three Lok Sabha constituencies.

"I will fight elections from Nagaur with support from BJP and I will also campaign across the country for the party", Beniwal said.

Beniwal also added that Congress has been misguiding people for years, so he was joining the BJP to stop it from coming to power. “Our aim is to bring back Narendra Modi as our Prime Minister in 2019,” said Beniwal.

Beniwal will take on Jyoti Mirdha, who has been fielded as the Congress candidate.

Beniwal was earlier with the BJP but later formed his own party. He is currently a member of the state legislative assembly from Kheenvsar (Nagaur) seat.

Even though Beniwal’s outfit won only three of the 58 seats it had contested by polling 2.4 per cent (or 8,56,038) votes, it played spoilsport in many other constituencies, including three in Barmer district.

Beniwal is a hugely popular leader among the Jat community, which comprises 12-14 per cent of the state’s population and exercises influence on around 70 seats in the assembly.

Beniwal’s alliance with BJP represents a setback for Congress because the Jats have traditionally been Congress supporters in these constituencies.

Beniwal had won in 2008 on a BJP ticket but was suspended from the party in 2012 due to differences with then CM Vasundhara Raje. In 2013, he contested as an independent from Khinvsar and won.