IS Operative Sends Out Message In Malayalam, To Target Thrissur Pooram And Kumbh Mela 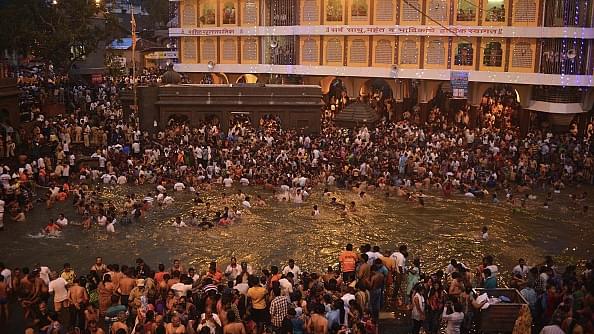 The Kumbh Mela is considered one of the holiest Hindu congregations. (Ahmer Khan/Anadolu Agency/Getty Images)

A chilling new audio issued by the Islamic State in Malayalam has emerged calling upon Keralite Muslims to carry out “lone-wolf” attacks across the country.

Lone-wolf attacks by ISIS – that is, attacks planned and carried out by self-radicalised local Muslims – have had the foreign security agencies in binds since they have become prominent recently. Much more organic in nature, these attacks are difficult to predict and thwart, as compared to conventional terror attacks, which depend on foreign instruction and funding.

Attacks across Europe and most recently Las Vegas in the United States, as claimed in the audio, have become the Islamic State’s signature move, which is otherwise rapidly losing territory in the Middle East.

The audio, which includes verses from the Quran in Arabic, implores Muslims to carry out these attacks in the holiest Hindu congregations, the Kumbh Mela and the annual Kerala temple festival, Thrissur Pooram, both attended by lakhs of people. It also lists out other alarming ways to carry out these attacks, among them poisoning water supplies, derailing trains and ramming trucks into crowds – all clearly focussed on maximising casualties.

Notably, there has been a spate of train derailments in India in recent years, their possible terrorist link being investigated currently by the National Investigation Agency.

The audio comes on the heels of a report by the Kerala Police, which suspects that as many as 100 locals might have joined the ISIS from Kerala, the most infamous of them being Rashid Abdullah, whose voice is believed to be in the audio.

Former Special Director of Cabinet Secretariat, V Balachandran, has expressed concern over the audio with the threat of the battlefield shifting from Europe and the Middle East to India.