‘Israel Has Never Had A Better Friend Than You’: Netanyahu Praises Trump As US Proclaims Golan Heights As Israeli Territory 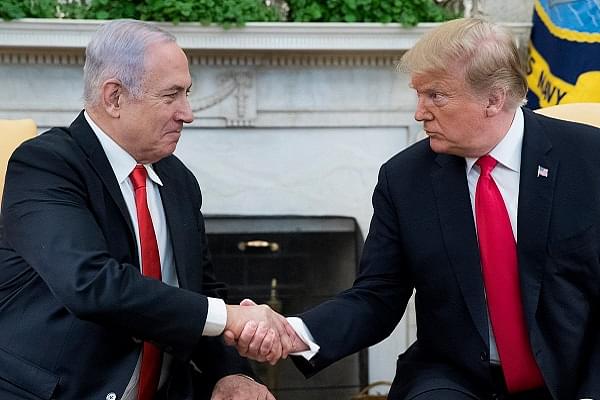 In a major departure from long held US position on the contentious dispute, US President Trump on Monday (26 March) signed an official proclamation recognising Israel’s sovereignty over the Golan Heights, BBC reported.

Today, it was my great honor to welcome Prime Minister @Netanyahu of Israel back to the @WhiteHouse where I signed a Presidential Proclamation recognizing Israelâs sovereignty over the Golan Heights. Read more: https://t.co/yAAyR2Hxe4 pic.twitter.com/gWp6nwRwsY

“We’re celebrating the Golan Heights. It’s something that I’ve been hearing about for many years,” Trump said during remarks to reporters at the White House alongside Israeli prime minister Benjamin Netanyahu after signing the proclamation.

“This should have been done, I would say, numerous presidents ago, but for some reason they didn’t do it, and I’m very honoured to have done it”.

Earlier last Thursday, Trump tweeted that “After 52 years it is time for the United States to fully recognize Israel's Sovereignty over the Golan Heights, which is of critical strategic and security importance to the State of Israel and Regional Stability!"

After 52 years it is time for the United States to fully recognize Israelâs Sovereignty over the Golan Heights, which is of critical strategic and security importance to the State of Israel and Regional Stability!

Netanyahu also copiously praised Trump saying “Mr President over the years, Israel has been blessed to have many friends who sat in the Oval Office, but Israel has never had a better friend than you”.

Trump has earlier recognised Jerusalem as the capital of Israel in 2017, calling it “a long overdue step to advance the peace process”.

Israel has held the Golan for 52 years since capturing it from Syria in the 1967 Six-Day War. About 20,000 Israelis and 20,000 Syrians live in the territory. Israel’s 1981 annexation by Israel is not still recognised by many nations. The disputed territory often remains a flash point in Middle East politics.

Syria's foreign ministry called the decision a "blatant attack on the sovereignty and territorial integrity" of Syria on Monday (25 March), in a statement carried by state news agency SANA.

The presidential order comes as shot in the arm for Netanyahu, who is facing a tough re-election challenge in upcoming elections. He faces a strong challenge from the from former IDF general Benny Gantz.