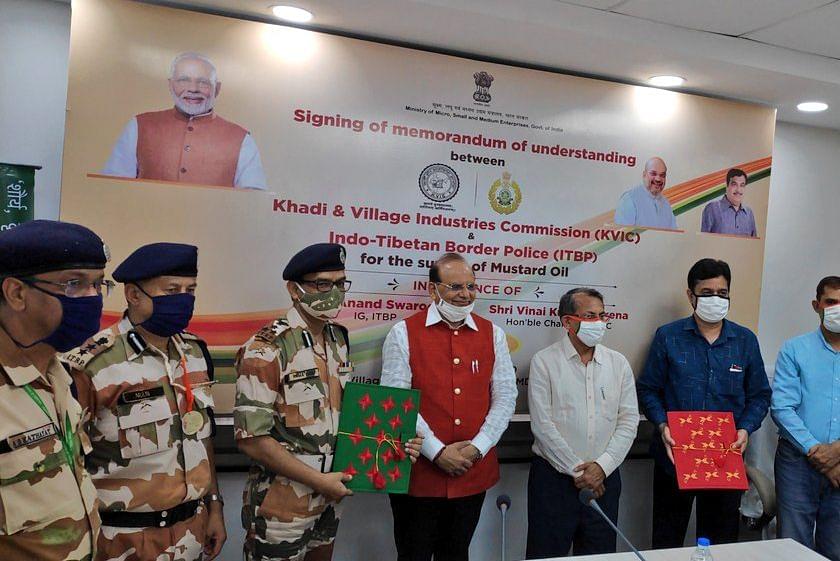 The Indo-Tibetan Border Police (ITBP) on Friday (31 July) signed an agreement with the Khadi and Village Industries Commission (KVIC), becoming the first among the Central Armed Police Forces (CAPFs) to get supplies from the Commission.

"ITBP signs the first agreement with Khadi & Village Industries Commission (KVIC) today. First CAPF to have supplies from the Commission. Many food, clothing and other issued items for ITBP jawans will be procured from KVIC in the days to come," ITBP said in a tweet.

ITBP signs the first agreement with Khadi & Village Industries Commission (KVIC) today. First CAPF to have supplies from the Commission. Many food, clothing and other issued items for ITBP jawans will be procured from KVIC in the days to come.#swadeshifirst #Himveers pic.twitter.com/A1USSkArQZ

According to the agreement, a total of 1,200 quintal of mustard oil is being procured from the KVIC by the ITBP with a total financial implication of Rs 1.73 crore.

The deal was was signed between at the base office of the KVIC between Commission Chairman Vinay Kumar Saxena and senior officers of Provisioning Directorate, ITBP.

It was decided during a meeting held at the Ministry of Home Affairs of the Directors General of the CAPFs in October 2019 that the use of terry Khadi uniform and other items of swadeshi origin should be made available to the CAPFs.

During the Home Minister Amit Shah’s visit to the ITBP Headquarters here last December, an exhibition stall was set up which displayed the KVIC products.

The ITBP had suggested that dhurries, blankets, towels, mustard oil, yoga kit, hospital bed sheets, pickels can be purchased for the forces through KVIC.

In the first phase procurement of the three items — dhurries, blankets, towels — would be made.

The process of procuring these items has begun.

For cotton Durries, the ITBP has been identified as the nodal agency to procure it for CAPFs.

Approximately 2.5 lakhs dhurries will be procured by ITBP for the CAPFs with financial implication of Rs 17 crore.