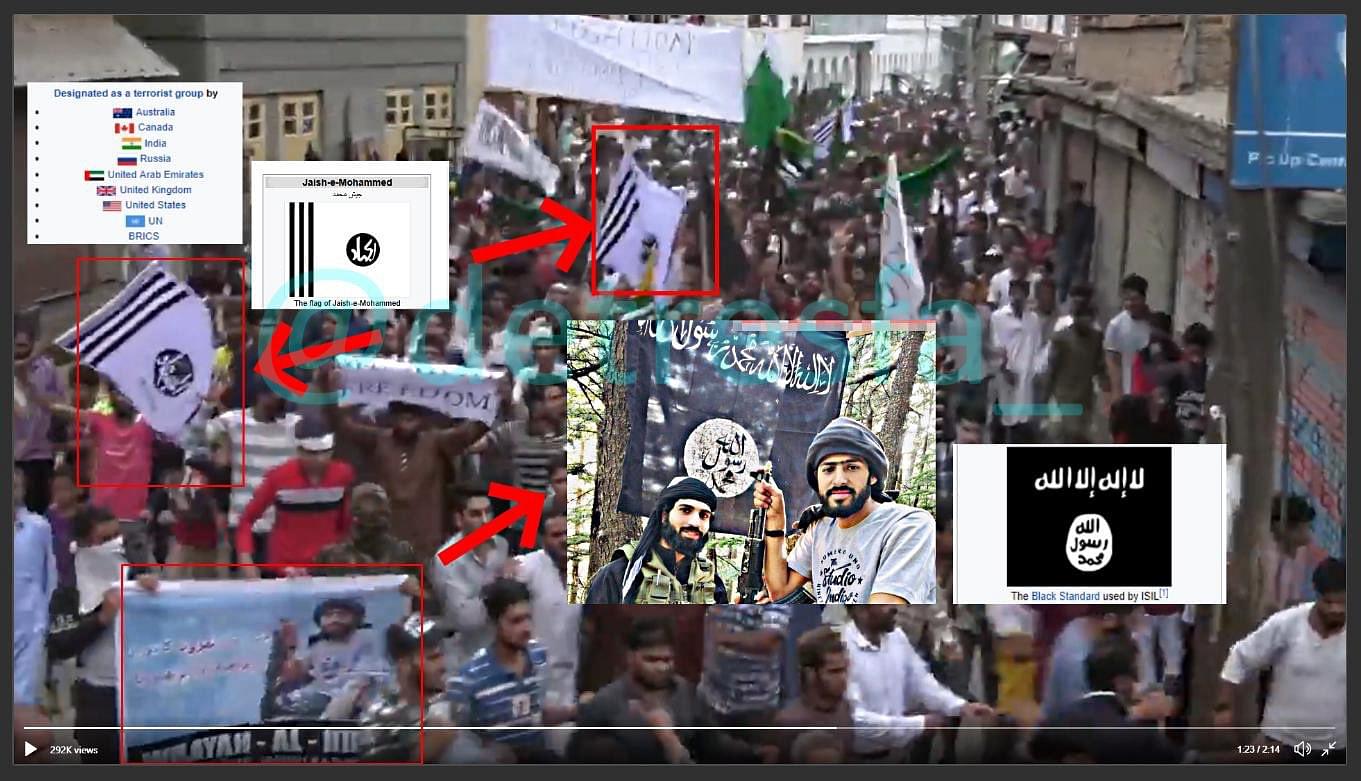 The video shared by BBC Urdu and the Government of Pakistan claiming to capture protests in Kashmir after abrogation of the special status of the state shows flags of various terror groups being waived, and slogans in support of slain terrorists.

Viral tweeted by BBC & Gov Of Pak is worrying because it clearly shows not just the Jaish E Mohammad flag, but also the ISIS flag behind a picture of Sayar Ahmed alias Abu Jaree the ISIS terrorist killed earlier this year. âPeacefulâ my foot. Geolocation from @detresfa_ awaited pic.twitter.com/z9ArGsl4HI

The video shared by BBC Urdu shows young men carrying flags of Jaish-e-Mohammad, Islamic State (IS) as well as banner with the photo of slain terrorist Sayar Ahmed alias Abu Jaree, an IS terrorist killed earlier this year. The crowd can also be heard shouting slogans for Zakir Musa, former Hizbul Mujahideen commander, and founder of an Indian terrorist cell of Al-Qaeda called Ansar Ghazwat-ul-Hind in 2017.

The video also shows slogans in favour of ‘Azadi’, and in response to the ‘Azadi ka matlab kya’ (What is the meaning of Azadi), the crowd can be heard shouting, “La Ilaha Il-Allah”, meaning, “There is no god but Allah”.

At the end of the video, a crowd of protesters can be seen shouting “Allahu Akbar” as the security personnel stand passively.

The Jammu and Kashmir Police administration in response to the video issued a clarification and requested the media personnel and agencies to act responsibly.

The Inspector General (IG) of Police, Kashmir, S P Pani rejected the media reports and said, “This is to clarify that some international media reports regarding firing incidents in the Valley are wrong. No such incident has taken place. Valley has remained largely peaceful over the last one week.”

"People should not believe any mischievous and motivated news reports regarding firing incidents in the Valley. The police have not fired a single bullet in the last six days. The situation is calm. people are cooperative and restrictions are being relaxed," he added.