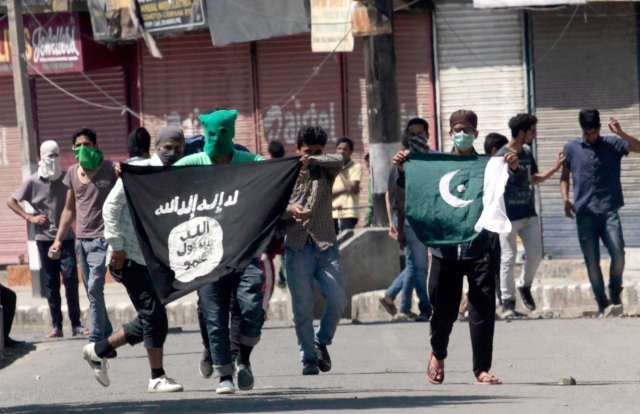 In a video that went viral on social media on Saturday (29 December), a group of masked men are seen unfurling the and waving the flag of radical Islamist organisation, Islamic State (IS), in Jamia mosque in Srinagar.

After 2013, when for the first time, the Islamic States’ flags appeared on the streets of Kashmir, the same flag is seen being unfurled by ISIS sympathisers at the pulpit, which is the spot from where Hurriyat leader, Mirwaiz Umar Farooq, delivers his Friday sermons.

Mirwaiz Farooq’s close aid said that the unpleasant incident occurred after the Friday prayers were concluded, that is, around 3 pm, and by then, Farooq had left the mosque.

“The attempt to desecrate Jamia mosque by a lumpen group of hooligans, whose identity is not known as yet as they hide it behind masks, nor is the identity known of those on whose behest they are indulging in these shameful acts, is strongly condemnable,” the mosque’s management issued a statement as reported by Indian Express.

The Joint Resistance Leadership (JRL) which encompasses of Mirwaiz Umar Farooq, Syed Ali Geelani and Yasin Malik condemned the event and termed it as a ‘well-planned design, attempts are being made not only to damage the religious centre but also to change the course of the ongoing movement.’