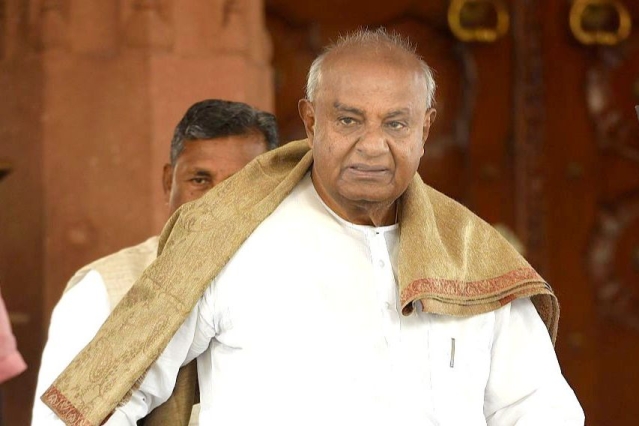 The suspense over former prime minister H D Deve Gowda throwing his hat in the Rajya Sabha polls, was finally cleared on Monday (8 June). The Janata Dal-Secular (JD-S) supremo would contest in the June 19 biennial elections to the Rajya Sabha from Karnataka, a party official said on Monday.

"Gowda has agreed to contest in the Rajya Sabha poll as our candidate on the assurance of support from the Congress, as our party is short of 10 votes required to win, with only 34 legislators in the assembly," JD-S official S. Sadananda told IANS here.

Gowda (87) will file his papers for the contest on Tuesday, which is the last date for nominations in the state Vidhana Soudha (legislature building) in the city centre in the presence of JD-S and state Congress leaders.

"We welcome Gowda agreeing to contest and assure him of our support to win the bypoll, as we will have surplus votes to spare after electing our leader Mallikarjun Kharge, who filed his nomination today (Monday)," Congress state unit spokesman Ravi Gowda told IANS.

"Former PM HD Devegowda has decided to contest the Rajya Sabha elections at the request of party legislators, Sonia Gandhi Ji and several national leaders. He is going to file his nominations tomorrow. Thanks to Sri DeveGowda for agreeing to everyone's consensus," Mr Kumaraswamy, former Karnataka Chief Minister, tweeted.

Former PM @H_D_Devegowda have decided to contest the Rajya Sabha elections at the request of party legislators, @INCIndia Sonia Gandhi Ji and several national leaders. He is going to file his nominations tomorrow. Thanks to Sri DeveGowda for agreeing to everyone's consensus.

Admitting that it was not easy to persuade Gowda to enter the Upper House, Kumaraswamy said that his father had seen success and defeat in life. He occupied top position in the country with the support of the people," said Kumaraswamy in another tweet in Kannada.

It will be second time Gowda will enter the Rajya Sabha, 24 years after he was its member as the prime minster from June 1996 to April 1997 of the United Front government of secular and regional parties from across the country.

With 68 lawmakers in the 225-member state legislative assembly, the Congress will have 24 votes to spare after casting 44 ballots to Kharge. As JD-S has 34 members, Gowda will need only 10 votes to win in the event of a contest for the fourth seat from the southern state.

"Gowda will replace our member Kupendra Reddy whose 60-year term in the Upper House ends on June 25. He has not sought re-nomination," said Sadananda.

With the term of the 4 members, including 2 from the Congress (B.K. Hariprasad and Rajeev Gowda) and one each from the BJP (Prabhakar Kore) and JD-S Reddy ending on June 25, the Election Commission on June 1 notified the bypoll in the state on June 19 and vote count on the same evening.

Deve Gowda lost in the May 2019 general elections from Tumkur to G.S. Basvaraj of the BJP, though his grandson Prajwal Gowda won from the JD-S bastion Hassan, defeating A. Manju of the BJP.

Kharge and Hariprasad lost in the May 2019 Lok Sabha elections from Gulabarga (reserved) and Bangalore South seats to the BJP's Umesh Yadav and Tejasvi Surya.

The ruling BJP, which has 116 legislators and support of 2 independents, will be able to send two of its candidates to the Rajya Sabha and still have 30 surplus votes after using 88 votes for its two contestants.

By fielding Gowda for the fourth seat, the Congress and JD-S, who are secular allies and had post-poll and pre-poll alliances for the Lok Sabha and state Assembly elections in May 2019 and May 2018, have queered the pitch and denied the BJP from winning a third seat from the state.