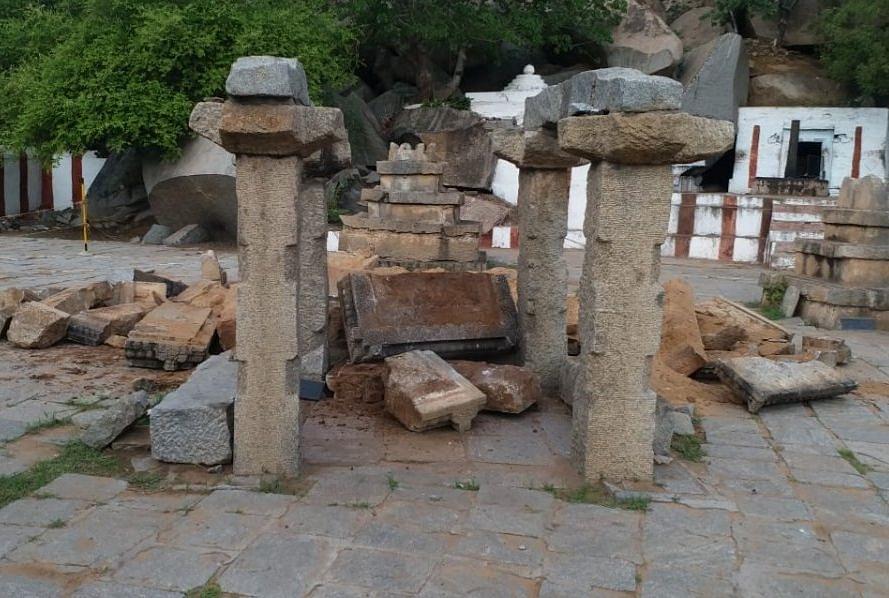 The destroyed structure in Nava Brindavana Karnataka (pic via Twitter)

In a major act of vandalism, which is likely to hurt the religious sentiments of lakhs of devotees, the Hindu religious site of Nava Brindavana in Karnataka’s Koppar was found destroyed today (18 July), reports Deccan Herald.

“The entire Brindavana has been dug up by dismantling the structure and breaking the carved stones that were used as embellishments for the Brindavana,” said a devotee in Anegundi.

Situated on the banks of the river Tungabhadra at Anegundi, the Nava Brindavana houses the Brindavanas (Samadhis) of nine prominent seers (saints) of the Madhwa tradition belonging to Uttaradi Mutt, Raghavendra Swami Mutt, Vyasaraja Mutt, Sripadaraja Mutt and other prominent mutts.

The miscreants chose to vandalise the holy site on an auspicious day for devotees, a Thursday, and especially at a time when the devotees and followers of the Madhwa tradition are performing Chaturmasa rituals.

The Gangavati police reached the site and inspected the damage. The police suspect that it could be the work of ‘treasure hunters’ active across the Hyderabad-Karnataka region.