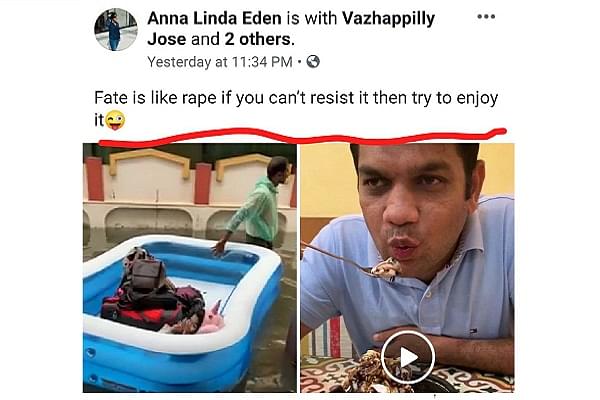 Journalist and Kerala Congress Member of Parliament Hibi Eden’s wife Anna Linda Eden has sparked a controversy with her insensitive Facebook post in which she has equated fate with rape, reports India Today.

The post was taken down by Anna after it drew immense criticism from social media users.

The post read - “Fate is like rape, if you can’t resist it, then try to enjoy it”. It also had two video clips of her child being rescued from their home following heavy rainfall in Kochi on Monday (21 October). The second clip was of Hibi enjoying a sizzler.

She later issued an apology in another Facebook post saying that she was not trying to hurt the sentiments of any woman who has faced the trauma of abuse. She also added that she is sorry for the words she chose and issued a public apology.