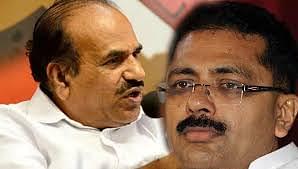 In an article titled 'Affront to Quran?' in the party’s propaganda mouthpiece Deshabhimani on Friday (Sep 18), Balakrishnan attempted to lend a communal colour to the ongoing investigation by authorities by invoking the religious sentiments of the Muslim community on Quran.

Balakrishnan, whose own son is facing the heat of the investigating agencies in the gold smuggling case, termed the state-wide protests by UDF as an attempt to lend a helping hand to the implementation of the 'anti-Muslim agenda' of the Rashtriya Swayamsevak Sangh (RSS) and the Union government.

“IUML is adding fire to the anti-Quran agitation of RSS. Congress will also be with IUML in that act. We are opposing the agitation against Quran on the ground that no religious text should become subject of ridicule,” Balakrishnan wrote.

Jaleel, who is widely seen as the most prominent Muslim face of the Communist Party Of India(Marxist) in Malappuram district, is facing probes by multiple agencies for his role in the gold smuggling case. Investigations have that Jaleel had accepted religious texts and food kits from the UAE Consulate, bypassing protocol norms and without getting duty exemption from the state.

Investigations have also revealed that Jaleel made several calls to the main accused Swapna Suresh when she was then working with Kerala State Information Technology Infrastructure Limited.

Jaleel began his political career with Muslim League. A fire brand SIMI leader during his college days, Jaleel served as the president of the Youth League, the youth outfit of the Muslim League. He was expelled from the party in 2005 after a bitter fallout with the then general secretary P.K. Kunhalikutty.

In 2006 Assembly, Jaleel emerged as the the most prominent face of CPM-led LDF in Malappuram district by defeating Kunhalikutty in the Kuttipuram constituency. He contest as an independent candidate supported by the LDF. In 2011, he was again elected from Thavanoor constituency and retained the seat in 2016 assembly elections.