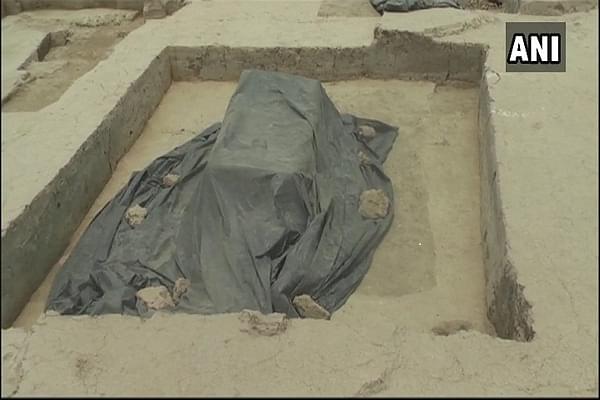 In 2018, ASI unearthed the remains of a chariot and other antique items that dates back to Bronze Age in Baghpat’s Sinauli village (@ANINewsUP/Twitter)

An ancient site in Uttar Pradesh’s Baghpat district where the Archaeological Survey of India (ASI) had unearthed the remains of a chariot and other antique items that dates back to over 2,000 BCE is likely to be declared a site of national importance, reports The Hindu.

According to the report, the ASI has started the process of declaring the site at Sadikpur Sinauli, which is spread over 28 hectares, of national importance. In this regard, the ASI issued a notification on 6 June seeking objections, if any, from the public for a period of two months.

The excavation and preservation work on the site started in 2018 and is still going on. As per an ASI official, the site was deemed to have national importance due to the finds uncovered.

As per the report, an ASI statement said that the treasures unearthed from the site include three chariots, legged coffins, shields, sword and helmets - all of which point towards a warrior class that may have existed around 2,000 BCE.

The archaeological research agency, in an official statement, earlier this year said the site was the “largest necropolis of the late Harappan period” of the early second millenium BCE.