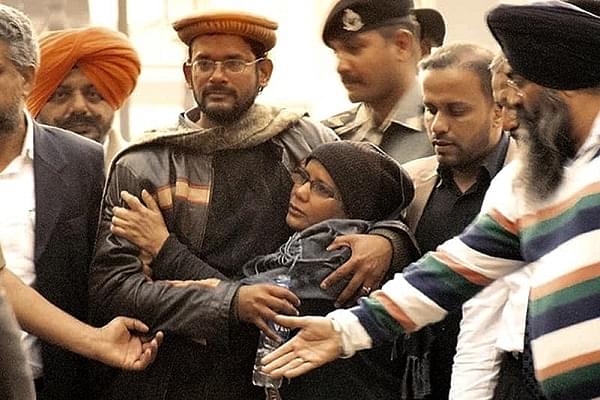 Ansari Meeting His Mother At The Wagah Border (@Zakaria Barbhuiya/Facebook)

Hamid Nihal Ansari, a software engineer from Mumbai who was imprisoned in Pakistan for six years, was finally released on 18 December and united with his mother at Wagah Border, due to the persistent efforts of External Affairs Minister Sushma Swaraj, reports India Today.

Ansari, a 33-year-old engineer, was arrested in 2012 for illegally entering Pakistan from Afghanistan, reportedly to meet a girl he had met online. In 2015 a military court tried him and announced that he be imprisoned in the Peshawar Central Jail.

His mother Fauzia subsequently filed a habeas corpus petition, only to be informed that the Pakistan Army has the custody of her son.

Ansari narrated his ordeal to Sushma Swaraj and his overwhelmed parents. He profusely thanked her and the ministry for taking this case and engaging with the Pakistan government.

Fauzi Ansari addressed Swaraj as ‘Madam’ and praised her and India for getting back her son.

Fauzia Ansari also stated that, “I know that my efforts were less and God's grace was more. It was because of God's grace that I got very good people who helped me through these years.”

Fauzi stated that the Indian government was incredibly supportive and sloganeering that, “My India is great, madam is great, she did everything’.

Ansari's father, Nihal, summed up the family's mood by saying, "It is a new dawn for us".