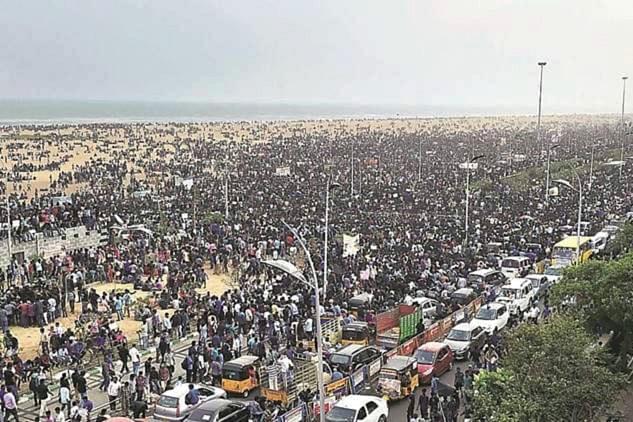 Protestors at the Marina Beach in Chennai. (pic via Twitter)

Stressing on the fact that public order is very important to sustain the democratic manner in the system, the High Court of Madras sidelined the request to use Marina beach for a hunger-strike. This has been done after setting aside the single judge order allowing the farmer to hold agitation there.

The Division Bench comprising of Justices K K Sasidharan and R Subramanian said that “The right to protest, no doubt is available to all the citizens in a democratic country like ours. Unfortunately, this right to protest has been continuously misunderstood as a right to inconvenience the general public. The protesters who claim to espouse the cause of the public often forget that their right to protest ends when the other person’s right to free movement and “right to not to listen to” starts.” , reported Deccan Chronicle on Tuesday.

Earlier on April 28, P Ayyakannu approached the High Court seeking permission to fast against the centre to intervene sooner enough to constitute a Cauvery Water Management Board, which has not been set-up despite the Supreme Court asking the Centre to do so. Representing the National South Indian River Interlinking Agriculturist Association, Ayyakannu was challenged by the government which said that no permission had been granted to hold any form of demonstrations.

The Bench stated that the affidavit filed by the City Police Commissioner Greater Chennai reminded that no form of protest has been allowed either on the beach, or on the service road or on Kamaraj Salai since almost 2003.

Reacting to the verdict by Madrash High Court, the petitioner said “Protesting is included in the rights granted to us by the Constitution. The government and the police can only regulate us and not ban us. The Supreme Court had given us that right in New Delhi. We will approach the Supreme Court challenging the HC verdict.”