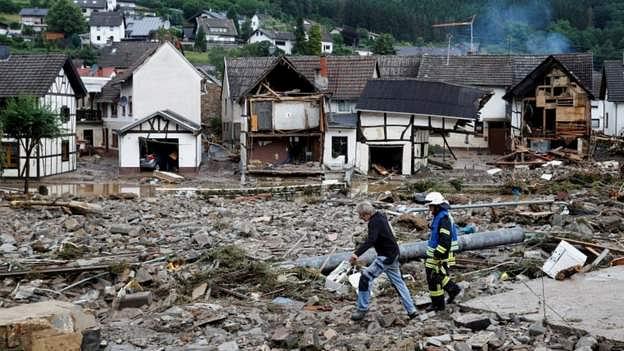 At least 120 people have been reported dead and thousands missing in catastrophic flooding caused by record rainfall in western regions of Germany. Heavy downpour caused rivers to burst their banks, devastating the region.

German emergency responders were on Friday still searching for hundreds of missing people after the worst floods in living memory.

The devastating flood also left at least 22 dead in neighbouring Belgium counted, while Luxembourg and the Netherlands were also severely affected by the torrents of water, with thousands evacuated in the city of Maastricht.

Residents of Liège, Belgium's third-largest urban area after Brussels and Antwerp, were ordered to evacuate. Local officials said those unable to leave should move to the upper floors of their buildings.

German Chancellor Angela Merkel, who is in the US ahead of a meeting with President Joe Biden, called the flooding a "catastrophe" and said she was "grieving those who have lost their lives".

"My thoughts are with you, and you can trust that all forces of our government - federal, regional and community - collectively will do everything under the most difficult conditions to save lives, alleviate dangers and to relieve distress." she added