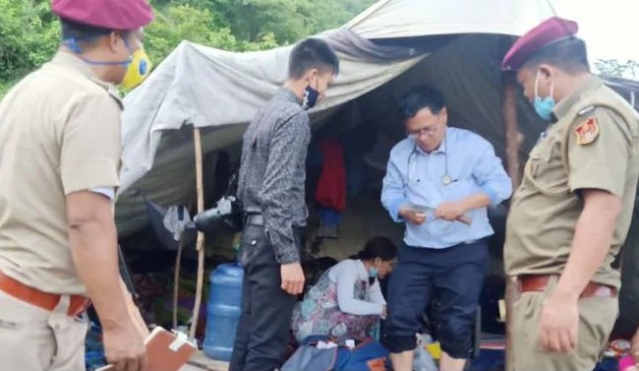 Dr Z R Thiamsanga (in blue shirt) after attending to a security personnel in a remote area. (Picture: Twitter/@dipr_mizoram)

Mizoram’s legislator Z R Thiamsanga proved nothing short of an angel for a pregnant woman amid a medical emergency, as he conducted a caesarean operation on her and helped deliver a healthy baby boy.

Those who know the 62-year-old qualified doctor turned MLA would be hardly surprised, given the fact that he is known for his penchant for extending a helping hand to those in need in the past too.

The Mizo National Front’s lawmaker told IANS on Tuesday that both the 39-year-old woman and her newborn were doing fine.

Thiamsanga said that during a visit to coronavirus-affected and quake-hit areas of remote Champhai district on Monday, he came to know that the pregnant woman was bleeding profusely and in a critical condition at the state’s Champhai district hospital and rushed there.

"C Lalhmangaihsangi, pregnant with her second child, was bleeding profusely and her condition was critical. As there was no gynaecologist present at the hospital at that time, I performed an emergency caesarean operation and helped deliver a healthy baby boy," Thiamsanga told IANS over phone from Champhai, bordering Myanmar.

The woman hailing from the remote Ngur village could not be move to Aizawl, about 200 km from Champhai, given her condition. “The lone gynaecologist posted at the Champhai hospital too was on leave,” he explained.

“Today, I inquired and hospital nurses told me that both the mother and the newborn are healthy and normal,” the lawmaker said.

Thiamsanga got his MBBS degree in 1985 and did his doctorate in Medicine in 1995 from the Regional Institute of Medical Science in Imphal in Manipur. He retired as head of department (Obstetrics and Gynaecology) at the Aizawl Civil Hospital in May 2018.

Later, he was elected to the Assembly in November 2018 as MNF candidate.

Thiamsanga, Vice-Chairman of the Health and Family Welfare Board, often advises people on health issues and treats people for any medical condition whenever he visits remote areas of Manipur, including his mountainous Champhai constituency.

In June, he rushed to virtually inaccessible Champhai area to attend to some ailing security personnel guarding the India-Myanmar border, crossing a stream and walking for around 10 km in the mountainous jungle.