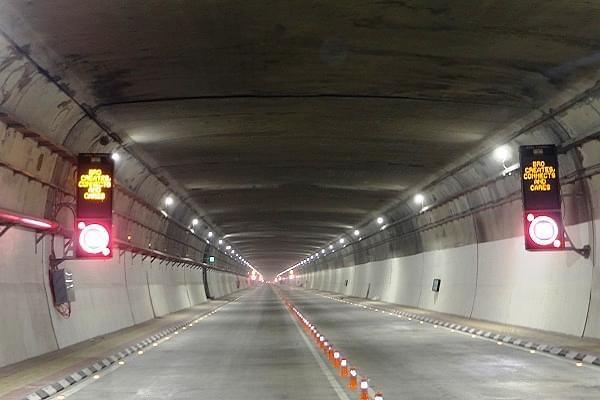 Here is a video encapsulating the tunnel journey from its conception in the Atal Bihari Vajpayee era to its completion.

The 9.02 km-long Atal Tunnel is the longest highway tunnel in the world and connects Manali to Lahaul-Spiti valley throughout the year. Earlier, the valley was cut off for about six months each year owing to heavy snowfall.

The Tunnel is built with ultra-modern specifications in the Pir Panjal range of Himalayas at an altitude of 3,000 m (10,000 feet) from the Mean Sea Level (MSL).

The tunnel reduces the road distance by 46 Km between Manali and Leh and the time by about 4 to 5 hours.

It is horse shoe shaped, single tube double lane tunnel with a roadway of 8 m and has an overhead clearance of 5.525 m.

The tunnel is 10.5-metre wide and has a 3.6 x 2.25 m fire proof emergency egress tunnel built into the main tunnel itself.

Atal Tunnel has been designed for traffic density of 3000 cars per day and 1500 trucks per day with max speed of 80 km/hr.

The Atal Tunnel is also key to providing all-weather connectivity to Leh and the forward areas of Ladakh.