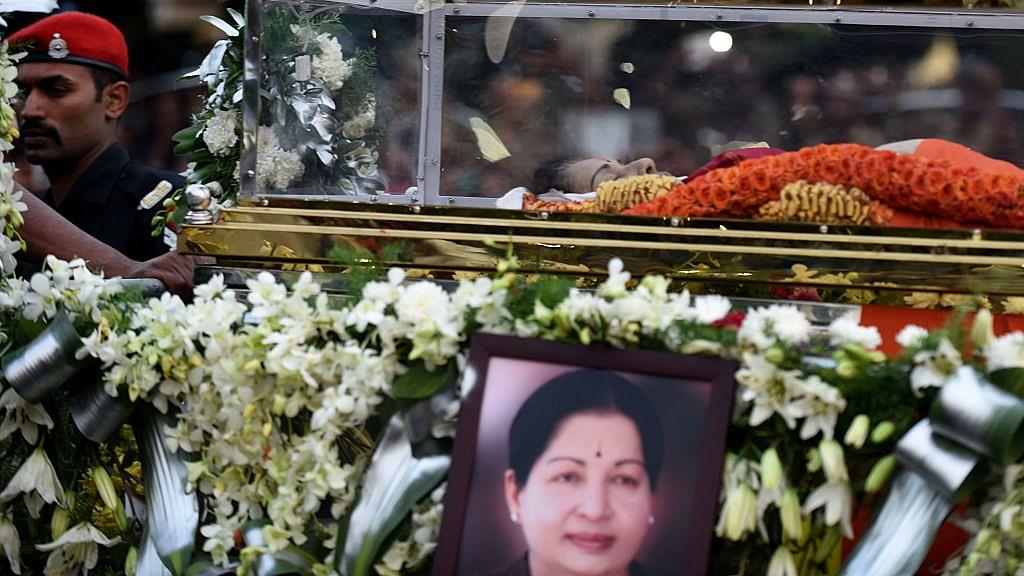 The mortal remains of Jayalalithaa are carried during a procession to her burial place in Chennai. Photo credit: ARUN SANKAR/AFP/GettyImages

Final Farewell To Amma: Former Tamil Nadu chief minister J Jayalalithaa was laid to rest with full state honours on Tuesday at Marina Beach in Chennai, right next to her mentor M G Ramachandran. The last rites were conducted by her close aide Sasikala. President Pranab Mukherjee, Prime Minister Narendra Modi and leaders from different political parties paid their condolences, along with more than a million grief-stricken supporters.

Farooq Abdullah Under Fire For Hurriyat Remarks: National Conference (NC) leader Farooq Abdullah has come under fire by Jammu and Kashmir Chief Minister Mehbooba Mufti for his remarks that his party is not against separatist Hurriyat. She alleged that NC wants to keep the atmosphere charged in the Valley as it “can go to any extent for power”.

RBI Rate Cut On Cards? The Reserve Bank of India (RBI) may go in for an interest rate cut today (7 December) as the economy reels from an unexpected clampdown on cash. Foreign investors will be looking for some assurance that new RBI Governor Urjit Patel has firm control over monetary policy.

New 100 Rupee Notes On Way: The Reserve Bank of India (RBI) will shortly issue Rs 100 denomination banknotes, with some changes on both sides of the note, bearing the signature of Governor Urjit R Patel. However, the old notes of this denomination will continue to be legal tender, the bank said in a statement.

India Will Be Black Money Free By The End Of This Year: India will become free of all black money by the end of this year, asserted Bharatiya Janata Party president Amit Shah on Tuesday, rejecting charges of illegalities in the party's land deals prior to the demonetisation announcement.

Merkel Calls For Burqa Ban In Germany: Chancellor Angela Merkel told her party members that Germany should ban full-face veils (burqa) “wherever legally possible” and that it would not tolerate any application of Sharia. Accepting her party’s nomination as their candidate for another four-year term, she used the moment to broaden her stance on banning the veil.

Probe Ordered Into INS Betwa Accident: A day after two Indian Navy sailors were killed after the 3850 tonne guided missile frigate INS Betwa collapsed on its side inside a naval dry dock in Mumbai, a board of inquiry is being constituted under a Rear Admiral. The Navy has vowed to take strict action against any personnel found guilty of lapses, and added that efforts are on to salvage the INS Betwa and make it battle-ready.

Mother Politics: Jayalalithaa managed to position herself as a benevolent provider of social security amidst large-scale employment and income-related insecurities. The state has in a sense therefore replaced the male bread winner.

From Puratchi Thalaivi To Amma: Jaya Firmly Established Her Political Legacy: Jayalalithaa had emerged from the travails of the patriarchal machinations that bound her life, she was firmly establishing her political legacy and she was emerging as a political leader of her own standing.

The Business Of Advice: A single heart-to-heart chat between Ratan Tata and Cyrus Mistry may do more for the shareholders of the group companies than all the advice doled out by outsiders.

Equity Allocation And Reforms: It’s important for investors to invest in financial assets, ignoring the current low-return phase and instead focusing on acquiring more equity and fixed income assets.

Jayalalithaa: An Enigma Till The End: In an era of 24/7 news cycles and increasing tabloidisation, she managed to retain mystery and allure which reminded one of personalities from a completely different era.

With Jaya Gone, TN Politics Will Become Multi-Polar, More Like UP Or Bihar: The future of Tamil politics will be a loose alliance of caste-based parties, and governments will be determined largely by the arithmetic of caste.

Yes, She Was Buried. So What? Jayalalithaa lived a Hindu life in an environment where the word was forbidden and she bravely declared her Hinduness all her life. This boldness defines her Hinduness, not her perceived or real shortcomings.

Post-Nagrota, We Must Rethink The NSA: It Is Not A Post, But An Institution: The think-tank needs to think strategy all the time, and develop one that will stand the test of time. It is time our NSA grew bigger, and was not reduced to a mere position reporting to the PM.

Tamil Nadu Politics At The Crossroads: Where Does It Go From Here? At least 10 political parties, including Congress and the BJP, are eyeing the disenchanted voters. Then, there are a bunch of newly formed but almost nondescript outfits attempting to fill the vacuum.