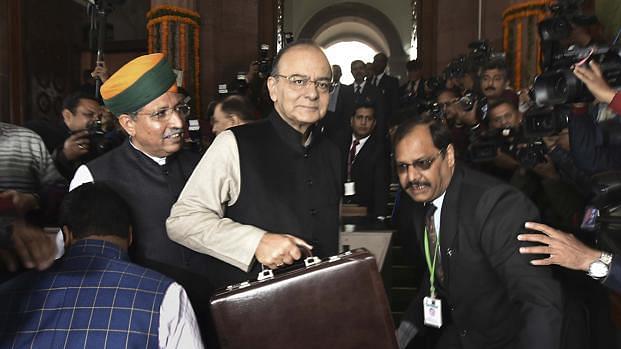 Jaitley on his way to make the budget speech.

New Global Oil Major In The Making: Finance Minister Arun Jaitley said in his budget speech on Wednesday that the government is planning to form a major oil company by merging some of the existing firms in the oil and gas sector to take on international and domestic players. The proposed oil major could top $100 billion in market value and compete with global oil giants. The government also announced setting up of two new strategic oil reserves in Chandikhole in Odisha and Bikaner in Rajasthan.

Jaitley Bets Big On Rural And Infrastructure Spending: Finance Minister Arun Jaitley on Wednesday sought to ramp up rural and infrastructure spending and handed out marginal tax relief to the middle-class and small businesses in his budget proposals. Acknowledging the “legitimate expectation” of relief in the middle class and cash-only informal sector, Jaitley said the budget will help beat the fallout of the government’s demonetisation initiative.

Green Signal For Rs 1 Lakh Crore Railway Safety Fund: After doing away with the 92-year-old colonial practice of having a separate annual railway budget, Finance Minister Arun Jaitley finally gave the green signal to set up a Railway Safety Fund of Rs 1 lakh crore over a period of five years. The recent spate of accidents has highlighted the vulnerability of the national carrier, which is running its operations using very old assets and outdated technology.

CRPF Planning Exclusive Training Centre For Women: The Central Reserve Police Force (CRPF) has proposed the setting up of an exclusive training centre for women at Alwar in Rajasthan in order to enhance their representation. The proposal to establish National Women Training College at Bahadurpur in Alwar district of Rajasthan is being actively considered by the Union Home Ministry and a decision will be taken soon to significantly enhance the number of Mahila trainees, a ministry official said.

Seven Killed As Maoist Trigger Landmine Blast: At least seven police personnel were killed and five injured in a landmine blast triggered by suspected Maoists in Odisha’s Koraput district on Wednesday, police said. The incident took place on National Highway 26 at Mungabhumi village under Pottangi police station on the Odisha-Andhra Pradesh border, when the personnel were travelling in a van to Cuttack for training.

Major Oil Spill Along Chennai Coastline: An oil spill along the coastline at Ennore, outside Chennai, is polluting several beaches, including the iconic Marina, after two ships collided at Ennore port's anchorage on Saturday. The damage appears extensive as the slick has already polluted many beaches about 25 kilometres away. The Union Shipping Ministry ordered an inquiry into the collision, following which local livelihood and aquaculture have been badly affected.

First Stage Of Brexit Bill Approved: British members of parliament on Wednesday approved the first stage of a bill empowering Prime Minister Theresa May to start pulling Britain out of the European Union. The 498 to 114 vote would allow the government to formally begin two years of exit negotiations. It was the first Brexit-related vote in the House of Commons, with a second and final vote in the lower house set for next week.

Trump’s Ban Won’t Stop Terrorists, Says UN Chief: United Nations Secretary-General Antonio Guterres said President Donald Trump's temporary suspension of immigration from seven Muslim-majority countries into the United States is not an effective way to stop would-be terrorists. These measures should be removed sooner rather than later, he said and added that terrorists would probably use supporters with passports from "developed and credible countries" rather than people from countries "that are hotspots of conflict today."

Steadying The Ship: The Narendra Modi government has past the halfway mark. Its economic performance has been competent. But the impact of its economic measures has not been near the point where it can go to the electorate with a triumphal economic narrative.

Budget 2017: Can Government Walk Its Impressive Talk? The workman-like Budget is neither grandiose nor populist. It is well-intentioned. But the impact on growth and investment will depend on how effectively and speedily the various programmes are implemented.

Prudent budget that emphasizes investment while attempting fiscal consolidation: The tone of the budget appears prudent, with an emphasis on public investments, incremental steps to promote schemes like Digital India and Skill India, and the absence of populist giveaways and negative shocks pertaining to capital gains tax on equity investments.

Budget 2017: Focus on consumption, infrastructure a step forward: This is the first budget where the govt is looking at a multimodal approach to transportation, trying to achieve synergies across investments in railways, roads, and waterways.

Driving Black Money Out Of Politics, Step By Step: If the public response to remonetisation is anything to go by, it’s clear that people want to join the fight against black money everywhere, even in politics.